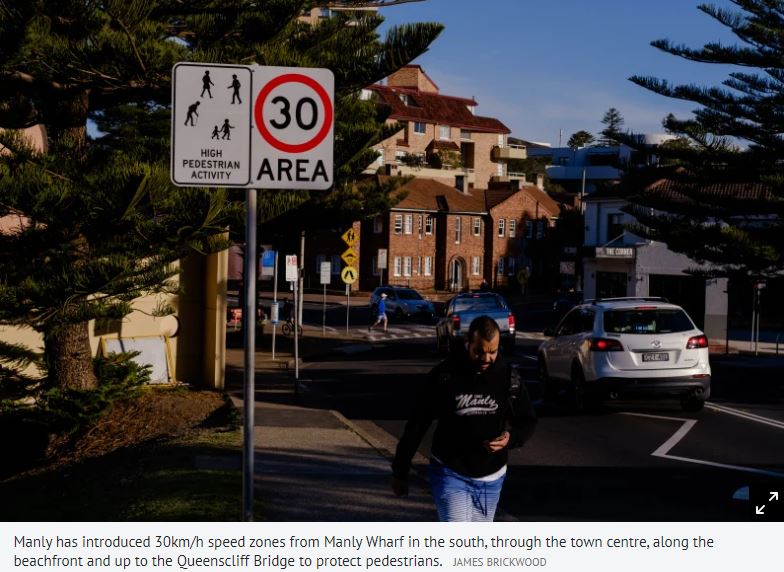 Manly is now home to NSW’s first 30km/h town centre, with the Northern Beaches Council slowing vehicles to protect visitors and locals who walk and cycle near the harbour and the beach.  And in Sydney’s south-west, speeds in the “highly walkable” town centre of Liverpool will drop to 30km/h to protect vulnerable road users. School zone speeds in Liverpool and Manly will also be reduced from 40km/h to 30km/h with new orange warning signs.

Manly and Liverpool are following an international trend: the City of London slashed speeds in the city centre to 32km/h (20mp/h) in March.  The moves are part of a NSW push to reduce speed-related injuries by cutting speeds to 40km/h or lower in very busy pedestrian areas and to make cities more liveable.   “Pedestrians have a 40 per cent risk of dying in a crash with an impact speed of 40km/h, but this falls to a 10 per cent risk when the impact speed is 30km/h,” a Transport for NSW spokesperson said. The risk of a pedestrian dying at 50km/h is 80 per cent.

Manly’s new 30km/h speed limit zone runs from Manly Wharf and harbour foreshore in the south, through the town centre and north along the streets running near the beach ending at Queenscliff Bridge.  About 2.3 million domestic and overseas tourists visited Manly every year before the pandemic.

The council’s chief executive Ray Brownlee said the 30km/h area zone was part of the council’s “places for people” policy. Manly was selected because of the high number of pedestrians, he said.  Replacing existing 40km/h speed limits with 30km/h had been well received, Mr Brownlee said. If successful, it will be extended to other areas in the northern beaches.

Statistics by the NSW Centre for Road Safety showed there had been 73 crashes in Manly’s new low speed zone, causing 62 injuries, from October 2014 to September 2019. A third of accidents involved pedestrians. Another 11 per cent involved cyclists.

Harold Scruby, the chairman of the Pedestrian Council of Australia, is alarmed by the increase in pedestrian deaths in NSW this year, rising 46 per cent to 35 dead.  He has been lobbying councils such as Northern Beaches for decades to reduce speeds, and wants governments to provide incentives to councils to introduce more 30km/h zones.  “The cost of trauma to NSW is around $9 billion a year,” he said. “The cost of pedestrian injuries are typically much higher than those of people injured inside motor vehicles.”

The speed limit behind NSW Parliament House to Mrs Macquaries Chair had been 30km/h for decades, yet many politicians protected by this low speed zone often opposed its introduction elsewhere, he said.  Research shows a kilometre decrease in travelling speed would lead to a 2 to 3 per cent reduction in road crashes and reduce injuries among all users.

North Sydney mayor Jilly Gibson also confirmed on Friday that the council was planning to reduce speeds to 40km/h in busy pedestrian areas.  New traffic calming measures near Kirribilli had been appreciated by cafe owners because they would make outdoor dining during COVID19 more pleasant, relaxed and easier for parents with children.  Speed limits were also cut to 40km/h last August around Sydney’s CBD, including parts of Pyrmont, Ultimo, Barangaroo, Dawes Point and Millers Point.

Martin Small, the president of the Australasian College of Road Safety, welcomed the new low speed zones.  He said road safety experts had been calling for the default urban speed limit to be lowered to 30km/h in all cities and towns during the pandemic.  This would free hospital beds by reducing road traffic injuries. He noted that Liverpool Hospital – near the new 30km/h zone – was a leading trauma centre.

In February, the 3rd Global Ministerial Council for Road Safety in Stockholm, Sweden, called for speeds on urban streets to be lowered to 30km/h.