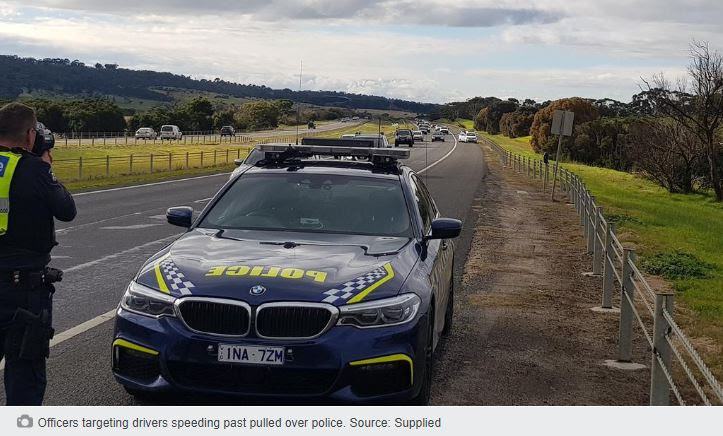 It’s supposed to keep emergency services workers safe. But almost two-thirds of drivers aren’t heeding a simple law — and there’s a new effort to do something about it.   Almost two-thirds of drivers are ignoring rules to slow down when they drive past emergency vehicles.  The behaviour is putting the lives of hundreds of emergency services at risk amid a desperate new plea to motorists.  The statewide effort begins on Monday.

New research, commissioned by Road Safety Victoria, reveals about 80 per cent of motorists know they must slow to 40 kmh when passing emergency vehicles with their lights flashing stopped on high speed roads.  But just 38 per cent do so.

Road Policing Command Assistant Commissioner Libby Murphy told the Sunday Herald Sun too many drivers complained it was hard to slow down by the time they saw police cars, ambulances and fire trucks on the roadside.  “People are actually consciously choosing to continue doing 80 kmh or whatever in the 40 kmh zone,’’ Ms Murphy said.  “They are just in a hurry to get places.

The State Government will tomorrow launch a campaign with police, firefighters and other emergency service workers pleading for drivers to keep them safe and slow down.  Victoria Police figures show 330 motorists were last year fined for passing an emergency vehicle at speed, an improvement on the 550 nabbed the previous year.

Police said many more got warnings.  “We know that speed plays a major factor in crashes, especially in collisions involving vulnerable road users such as pedestrians, which is why it’s so important to slow down and keep our emergency service workers safe,’’ Road Safety Minister Jaala Pulford said.