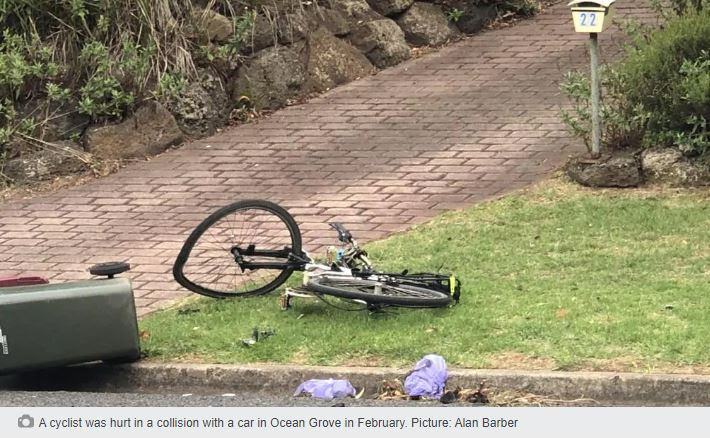 More and more Geelong cyclists are calling on the state to enact – or at least trial – minimum passing distance laws, as a record number of cyclists are hospitalised on the regions roads.  Bicycles Users Geelong (BUG) on Friday threw its support behind a minimum passing distance law, while the RACV also renewed calls for the State Government to trial the improved safety rules.

They join numerous cyclists, Bicycle Network, Bike Safe and even Tour de France winner Cadel Evans in backing the introduction or trial of the laws this year.  “I think one of the big benefits is not in prosecuting people, but just making people driving one-and-a-half-plus tonne vehicles more aware of the things they need to be aware of – to allow enough room when passing vulnerable people,” BUG spokesman Brett Cleeland said.

“If there’s no tolerance [for giving cyclists space], then that can certainly lead to a collision which can be quite life changing to someone on a bike. Any collision with a car when you’re on a bike is likely to result in an injury.  Having a minimum passing distance law would be a good idea. It would bring Victoria in line with the rest of Australia, where I think most, if not all, states or territories already have a law.”

RACV General Manager Public Policy Bryce Prosser on Friday renewed the groups calls for a trial of the safety measure.  “Now, more than ever, we need both cyclists and motorists to feel safe on our transport network and a minimum passing distance can play a significant part in ensuring everyone gets home safely,” Mr Prosser said. “RACV would welcome the opportunity to work with government to establish a trial which considers some of the unique issues on Victorian roads.”

A government spokesperson for Road Safety Minister Jaala Pulford said the state was “currently considering the effectiveness of this road rule in other states”. The Geelong Advertiser last week revealed a record number of cyclists were being hospitalised on the region’s roads according to Transport Accident Commission (TAC) data.

The TAC recorded 32 cyclist claims involving hospitalisation on Geelong’s roads in 2018/19 – the most in a decade. It was more than twice as many as recorded in 2015/16 (15) and quadruple the eight claims recorded in 2010/11.  It’s feared the yet-to-be-released data for the current financial year will topple 2018/19’s record number of hospitalisations, with more recent Victorian statistics revealing an increase in cyclist fatalities.

A TAC ‘Towards Zero’ campaign calls for drivers to slow when passing cyclists and give them at least 1m space in zones up to 60km/h, and 1.5m in faster areas.