The battle for attention 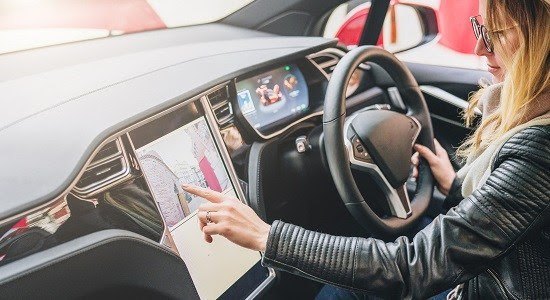 Recent research by IAM RoadSmart shows some worrying trends that that the latest in-vehicle infotainment systems impair reactions times behind the wheel more than alcohol and cannabis use.

Among the shocking results, the study – undertaken by TRL on behalf of IAM RoadSmart, the FIA and the Rees Jeffreys Road Fund – found that reaction times at motorway speeds increased average stopping distances to between four and five car lengths, drivers took their eyes off the road for as long as 16 seconds while driving, and using touch control resulted in reaction times that were even worse than texting while driving.

1. Controlling the vehicle’s position in the lane and keeping a consistent speed and headway to the vehicle in front suffered significantly when interacting with either Android Auto or Apple CarPlay, particularly when using touch control

2. Participants failed to react as often to a stimulus on the road ahead when engaging with either Android Auto or Apple CarPlay – with reaction times being more than 50 per cent slower

3. Reaction time to a stimulus on the road ahead was higher when selecting music through Spotify while using Android Auto and Apple CarPlay

4. The impact on reaction time when using touch control (rather than voice control) was worse than texting while driving

5. Use of either system via touch control caused drivers to take their eyes off the road for longer than NHTSA (National Highway Traffic Safety Administration) recommended guidelines

6. Participants underestimated by as much as 5 seconds the time they thought they spent looking away from the road when engaging with Android Auto and Apple CarPlay via touch control.

“While we would like to see a review of these systems in the future, we would encourage owners of vehicles fitted with these systems to use them in the safest possible way, including setting everything up before starting a journey”  commented Neil Greig, IAM RoadSmart Director of Policy & Research.

One solution to the problem is that touchscreens could be disabled when the engine is running, or the parking brake is applied, although that does mean that any passenger in the car or van cannot use the in-car system. Perhaps the long term solution is a voice command system similar to Alexa, although it may be difficult for any device to understand instructions at motorway speeds.