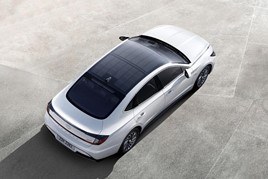 Hyundai is launching its first car with a solar roof charging system that can provide vehicles with additional electrical power, as well as increasing fuel efficiency and driving range.

The system makes its debut on the new Sonata Hybrid, a car that is currently only offered in the Korean market.

Hyundai says it will roll out the technology to other vehicles across its range in the coming years.

“Solar roof technology is a good example of how Hyundai Motor is moving towards becoming a clean mobility provider. The technology allows our customers to actively tackle emissions issue” said, Heui Won Yang, senior vice president and head of Body Tech Unit of Hyundai Motor Group. “We are striving to further expand the application of the technology beyond eco-friendly vehicle line up to vehicles with internal combustion engine.”

It is expected to provide 800 miles of travel annually.

The system is composed of a solar panel and a controller. Electricity is produced when solar energy activates the solar panel’s surface, which converts this energy by using photons of light from the sun. This creates the electron-hole pairs in silicon cells, which generate solar electricity.

The electricity from this process is converted to the standard voltage by the controller, then stored in the battery. Hyundai Motor took not only efficiency but also design into account while developing the solar charging system.

While the solar roof system currently plays a supporting role, it opens up perspectives for vehicles that no longer need fossil fuel to operate.

So would the solar roof charging system be a win for Australia?

Perth, Brisbane, Sydney, Canberra, Adelaide, Darwin, etc have plenty of sunshine making them perfect cities for one of these vehicles.

Hobart and Melbourne have the lowest rates of sunshine of all our capital cities, the range may not be quite as great spically during those overcast winter months.

The other positive, get one of these vehicles with the large range and no more fuel excise… a win for the consumer, not sure whether the government have quite caught on yet what this means for their piggy banks.