‘She hasn’t been able to shake it off’: Falling sign victim to seek compensation 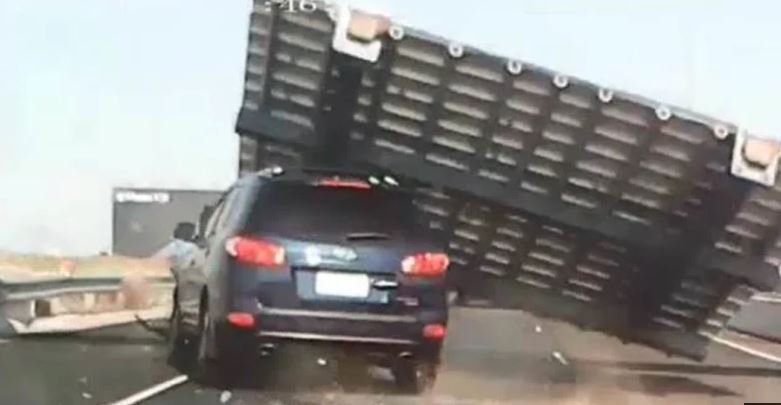 A mother who says she has been left psychologically traumatised with head, neck and shoulder pain after an overhead sign collapsed on her car while driving on the Tullamarine freeway will fight for compensation.

Nella Lettieri, 53, was going to pick up her daughter from Essendon Airport on January 8 when the four-tonne sign collapsed on her SUV.

Dashcam footage from a vehicle behind shows the force of the sign crushing Ms Lettieri’s car and pushing it forward, even though she had slammed on her brakes. She escaped serious injury, but was taken to hospital for treatment.
She has now engaged lawyers and is seeking compensation from VicRoads and Transurban. She says she has been unable to return to work and has been afraid to drive since the incident.

Carbone Lawyers managing partner Tony Carbone, said the process was still in its “very early stages” as they were assessing the full extent of Ms Lettieri’s physical and psychological injuries.

“She’s not well, she has had severe headaches and hasn’t been able to shake it off. The roof, which was crushed by the sign, hit her and head and we are still getting that investigated to work out the full extent of damage,” he said.

“With psychological injuries, it will be time before the full extent is known – realistically we can’t do anything for eight to 12 months.

“Under Victorian law, you cannot mount damages unless there are serious injuries. You have to apply to the Transport Accident Commission… you lodge an application and send medical reports and things like that. It’s early days. We have to ascertain the full extent of her injuries,” Me Carbone said.

He said Ms Lettieri had also been suffering from neck pain, including hearing “cracking and clicking sounds”, as well as shoulder pain, trouble sleeping, flashbacks and nightmares.
“She has been playing it over in her mind. It’s also had a massive impact on her three daughters.”

Earlier this month, Ms Lettieri said she first thought she had rammed another car when the four-metre by five-metre sign crushed her vehicle on the Tullamarine freeway, near Essendon Airport.

“I thought I hit the back of something … but looking at it, I’m thinking, where’s the car?” she told Nine.

“It was like a roller door had come down right in front of me and just shut and I think I’d gone to swerve thinking, ‘OK, it’s fallen, let me just move to the side’, but it actually fell on me and it just kept falling.”

Transurban’s preliminary finding into the January 8 incident was that a steel component known as a “stiffener plate” was not installed in the gantry that held the sign.

The plate is supposed to be placed where the vertical structural support connects to the horizontal gantry to make it more secure.