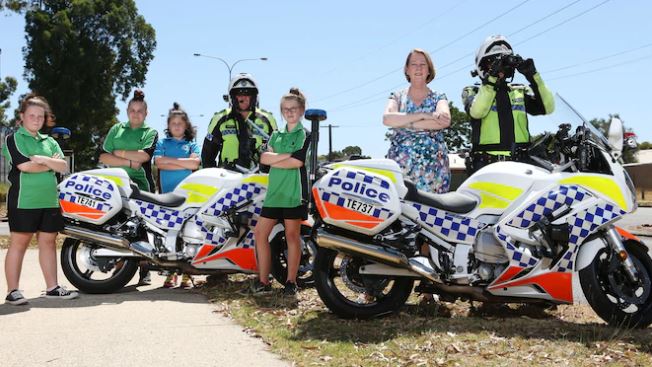 More than 37,000 lead-footed drivers were caught speeding in school zones last year — or about 190 people every school day — during busy drop-off and pick-up times.

And police say it’s not uncommon for the drivers they nab speeding in school zones and risking children’s lives to include parents and teachers.

Police will blitz school zones this week as thousands of public school students return tomorrow, prompting warnings to drivers to slow down and be vigilant.

WA cops handed out 37,428 infringements last year to drivers going above the 40km/h limit in school zones during the enforceable hours last year.

Authorities have also revealed last year’s 10 worst suburbs for school-zone speeding, topped by Geraldton’s CBD which includes five schools in close proximity, with police issuing 1296 fines, or the equivalent of more than six every school day.

In 2017, Meadow Springs held the worst offender ranking with 992 infringements.

Forty-one people have been injured badly enough in school zone accidents between 2013 and 2017 to need hospital or medical treatment, while an 11-year-old boy was killed in a school zone in Nollamara in June 2013 after he was hit by a car while riding his bike on the footpath to school.

“It means that the lives of our children were put at risk thousands of times by people too impatient or too distracted to obey the law,” she said.

“Don’t be that person, I ask drivers everywhere to be mindful of the 40km/h speed limit around schools. We need drivers to switch on and put children’s lives first.”

Ms Roberts said shaving a few seconds off your journey should not come at the expense of road safety, particularly when it involved children.

“Police have told me it’s not uncommon for them to nab parents who are dropping their own kids off to school,” she said. “In some instances, teachers have also been caught.

“For parents, remember that journey doesn’t end when you’ve dropped your kids off.”