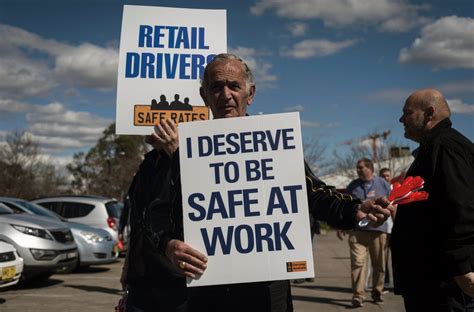 Recent truck driver fatalities in New South Wales and a call for action by Toll managing director Michael Byrne have refocused attention on the safety of Australia’s road transport industry.

Truck crashes are often blamed on drivers. This point is well-illustrated in more than 400 investigations into serious crashes in Australia that largely focus on driver characteristics (like gender and age) and behaviour (like speed and fatigue). This is mirrored in other research: the primary focus of crash causation has been on identifying the role of unsafe driver behaviours, such as inappropriate speed, fatigue and drug use.

The problem with this approach is that it does not identify the full range of factors contributing to crashes, and limits our opportunity to learn from crashes and improve safety in the industry. So, a rethink in the approach to road freight transport safety is urgently required to reduce fatalities and injuries.

Major safety audits in the Australian truck industry have identified a large number of work system failures. For example, multiple organisational factors were identified as contributing to the fatal crash of a fuel tanker operated by Cootes Transport in 2009.

While truck rollovers often are blamed on individual drivers, cases such as this illustrate that road transport organisations play a significant role in such crashes.

Prevention efforts in the transport industry are also driver-focused. Fatigue management is a good example. The core of the laws for fatigue management requires that a driver must not drive a fatigue-regulated heavy vehicle on a road while impaired by fatigue. This implies that fatigue is primarily a problem with the driver, rather than a work system that encourages drivers to operate a vehicle while fatigued.

Research has documented clearly the strong incentives, driven by market pressures and pay schedules, for drivers to engage in dangerous driving behaviours. So, the industry, regulators and government are currently overlooking the causes of crashes in their prevention efforts.

Toward a systems thinking approach

A rethink in the approach to road freight transport safety requires a shift from the driver-focused approach to a systems-thinking approach.

A systems-thinking approach is underpinned by the idea that road freight transport crashes are caused by multiple, interacting factors within the system. Driver error is seen as the outcome of the interactions between these factors – and not as a cause of crashes.

To maintain control over safety, the decisions and actions of government, regulatory bodies and road freight transport management must be informed by accurate information on the actual working conditions and the interacting factors influencing driver behaviour.

Our study of the road freight transportation system drew on contemporary knowledge about crash causation in road transport more generally, and in other safety-critical domains. We examined 21 publicly available Australian coronial inquest reports into truck crashes between 2004 and 2014.

Our study found these reports clearly identified the role of government, regulatory bodies, road safety authorities, the supply chain, freight companies, and freight drivers in crash causation. However, their recommendations were predominantly focused on fixing isolated components in the system, such as the decision-making of drivers and speed.

A new approach to investigating truck crashes is urgently required to help shift the focus during crash investigations from driver behaviour onto the work system and beyond – to the supply chain, regulatory bodies, and government agencies.

We need to stop blaming and start reforming the transportation industry using a systems-thinking approach. To do this, we need to design the methods and tools to collect the right data so that prevention efforts target the right elements in the transportation system – not just the truck driver or other road users. This should include developing an Australia-wide freight crash reporting and analysis system that is underpinned by systems thinking.

This is the responsibility of all parties in the transportation system. The safety of road users matters, and the status quo of focusing on drivers alone is a hindrance to achieving safer roads.