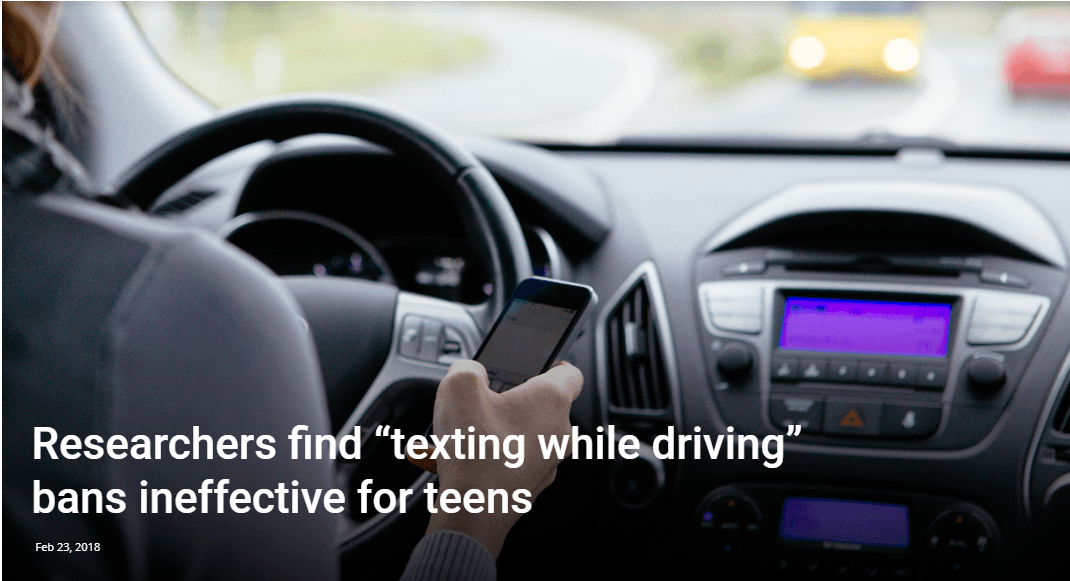 Laws that ban texting while driving are not as effective as universal bans on hand-held cellphone use, according to a new study led by the Center for Injury Research and Policy (CIRP) at Nationwide Children’s Hospital.

Researchers used data from a national survey to examine the effectiveness of state-level cellphone laws in reducing teens’ use of cellphones while driving. The study found differences in the effectiveness of the laws for teen drivers’ cellphone use based on the type of ban – hand-held phone conversations or texting – as well as whether the ban applied to young drivers or all drivers (universal). Teen drivers reported 55% fewer hand-held phone conversations when universal hand-held calling bans were in place compared to state with no bans.

The study found that bans limited to just young drivers were ineffective in reducing both hand-held conversations and texting. Even with laws in place, approximately one-third of teen drivers still talk on the phone and text while driving.

While the causes for the differences in laws and behavior are unknown, the researchers believe the relationships may be attributed to actual or perceived enforcement of these laws. For example, it may be easier for police to enforce universal hand-held bans because they don’t need to judge a driver’s age from afar and can more easily identify a driver holding a phone to his ear than using a phone in his lap. Drivers may also feel an officer would more easily observe them holding a phone to their ear than texting in their lap.

The study, carried out in conjunction with researchers from West Virginia University and the University of Minnesota, compared state-level cellphone laws and differences in both texting and hand-held cellphone conversations among teen drivers across four years. The study has been published in the Journal of Adolescent Health.