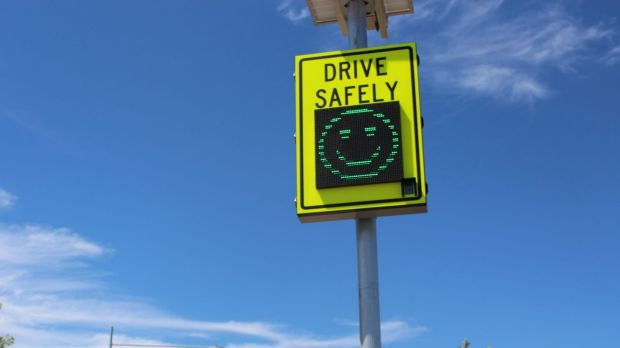 If you’re driving down Casey Crescent in Calwell and see a big smiley face as you drive past, congratulations – you’re obeying the speed limit.

A $40,000 trial of smiley faced speed detection signs will be placed in some of Canberra’s busiest residential streets to help combat speeding, Member for Yerrabi Michael Pettersson said.

“If the signs detect that the motorist is travelling within the speed limit, they will see a ‘smiley face’ on the screen,” Mr Pettersson said.

“But if the motorist is travelling above the designated speed limit, they will see a ‘SLOW DOWN’ message. We hope this will remind motorists to drive to the speed limit and be careful in some of these busy areas.

He said he the signs were expected to remain at a location for up to three months before being moved elsewhere.

“We are confident that this period is sufficient to positively influence the behaviour of motorists,” he said.

The first speed detection sign was switched on at Crace on Wednesday.

The speed detecting sign trial will begin this month, at four locations:

Other locations to be included in the trial are:

Road Safety Minister Shane Rattenbury said the signs were successful in other jurisdictions, including Queensland and New South Wales.

“These new speed detecting signs are not enforcement devices but detect motorist’s speed as they approach the sign,” Mr Rattenbury said.

He said the government hoped the signs would encourage motorists to be mindful of their driving behaviours and urged everyone to be safe when travelling.

“Be aware of speed limits and the road conditions, slow down and drive safely – for all road users,” he said.

“There is no excuse for speeding, especially in high-risk areas like school zones where some of our most vulnerable road users are.”

The trial received $40,000 in grant funding from the 2016 round of the ACT Road Safety Fund grants program.