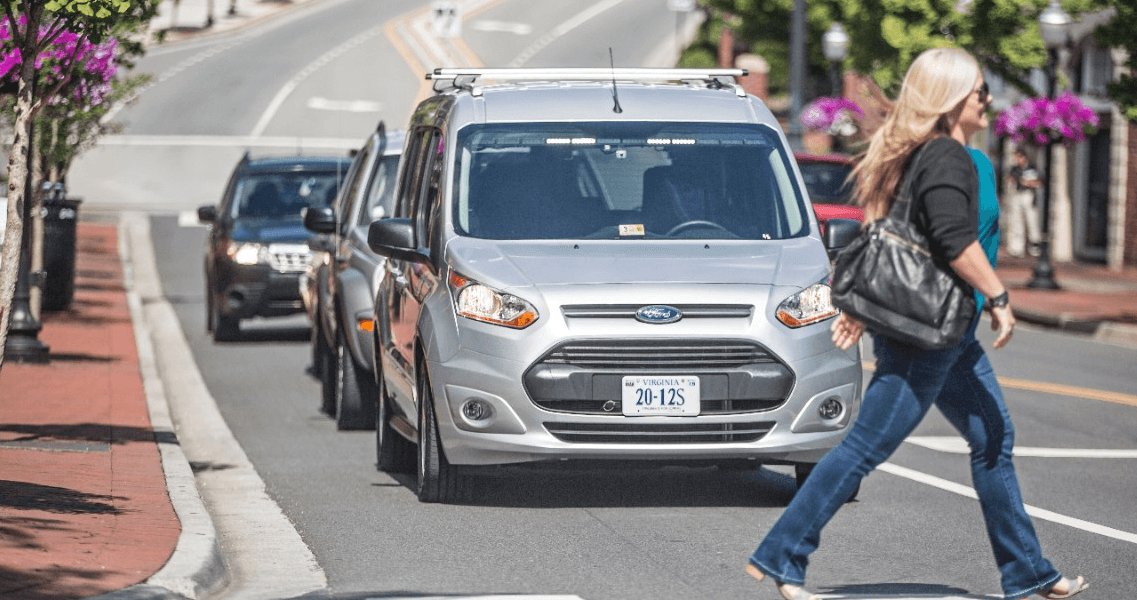 The rise of self-driving technology poses many possibilities and challenges.

One of these challenges is how people outside of self-driving vehicles would interact with them, especially when there are no occupants.

Ford and Virginia Tech Transportation Institute are testing a Ford-designed lighting method for self-driving vehicles to signal their intent to pedestrians, human drivers and bicyclists in an effort to create a standard visual language everyone can easily process and understand

WASHINGTON, D.C., Sept. 13, 2017 – Today, a simple head nod or hand wave from a driver is usually enough to indicate it’s okay for a pedestrian to cross the street, but in an autonomous vehicle future, how will a self-driving car with no human aboard communicate with walkers, cyclists or people operating other cars on the road?

Looking to prepare for this eventual reality, Ford Motor Company partnered with Virginia Tech Transportation Institute to conduct a user experience study to test out a method for a self-driving vehicle to signal its intent by soliciting real-world reactions from people on public roads.

“Understanding how self-driving vehicles impact the world as we know it today is critical to ensuring we’re creating the right experience for tomorrow,” said John Shutko, Ford’s human factors technical specialist. “We need to solve for the challenges presented by not having a human driver, so designing a way to replace the head nod or hand wave is fundamental to ensuring safe and efficient operation of self-driving vehicles in our communities.”

As part of Ford’s efforts to consider a full range of real-world implications to ensure autonomous vehicles can safely share the road with humans, the joint research project set out to investigate the most effective means for enabling communication between a self-driving vehicle and other road users.

Researchers considered using displayed text, but that would require people all understand the same language. The use of symbols was rejected because symbols historically have low recognition among consumers. In the end, they went with lighting signals. Light signals for turning and braking indication are already standardized and universally understood, so an innovative new application of lighting was determined to be the most effective means for creating a visual communications protocol for a self-driving vehicle to signal to others whether it is operating in autonomous drive mode, beginning to yield or about to accelerate from a stop.

So Ford placed a light bar on the windshield of a Transit Connect test vehicle. Six high-definition cameras were mounted to provide a 360-degree view of surrounding areas to capture the behaviour of other road users.

To simulate a fully self-driving experience, researchers developed an innovative seat suit to conceal the human in the driver’s seat. Designed to look like an ordinary driver’s seat to others, the suit creates the illusion of a fully autonomous vehicle, which is essential for evaluating real-world encounters and behaviours between van and other road users. The team then went to work experimenting with three different light scenarios to test the signalling of the vehicle’s intent:

Ford’s Transit Connect simulated autonomous driving on public roads in northern Virginia – home to a density of traffic and pedestrians – throughout August, with researchers capturing video and logs of people’s reactions. More than 150 hours of data over approximately 1,800 miles of driving was collected in an urban environment, including encounters with pedestrians, bicyclists and other drivers. External signals were activated more than 1,650 times at various locations around Arlington, including at intersections, parking lots, garages and airport roadways. Researchers will use all of this data to understand how other road users change their behaviours in response to the signals a self-driving vehicle employs.

“This work is of value not only to vehicle users and manufacturers, but to anyone who walks, rides or drives alongside an autonomous vehicle in the future,” said Andy Schaudt, project director, Center for Automated Vehicle Systems, Virginia Tech Transportation Institute. “We are proud to support Ford in developing this very important research.”

The push for an industry standard

Ford is already working with several industry organizations to push toward creation of an industry standard, including the International Organization for Standardization and SAE International. A common visual communications interface most people can understand across all self-driving vehicles in all locations will help ensure safe integration of autonomous vehicles into existing transportation systems. Ford also recognizes the need for a communications protocol with those who are blind or visually impaired, and is initiating research into a potential solution as part of a separate project.

“Preparing for a self-driving future is going to take all of us working together,” said Shutko. “That’s why we’re developing and advocating for a standard solution so it can be adopted by the industry and applied to all self-driving vehicles.”