Driving under the influence of drugs is a major risk factor for road accidents, yet young drivers have minimal knowledge of the dangers of drug-driving. This project used social marketing principles and feedback from student surveys and focus groups to develop appropriate and effective anti-drug driving messages that target university student drivers.

The Smashed: Drugs and Driving Don’t Work Development of effective advertising materials targeted at 18-25 year olds project aimed to develop high-quality resources to create an awareness, and acceptance, among the target audience – drivers in the 18-25 year old age group – that taking illicit drugs can impair driving ability, and also to reduce participants’ intentions to engage in drug-driving.

In Phase Two, we surveyed young people aged 18-25; recruited from ANU, CIT and Road Ready. Overall, our survey of 641 young Territorians found that they had an overall lack of knowledge in relation to drug driving – including the effects of drugs on driving skills (with many believing their driving is improved or unimpaired), the ability of police to test for drugs, and the penalties for driving under the influence. This is concerning given that more than one in five reported being a drug user, and approximately one in ten reported driving after consuming illicit drugs at least once in the previous 12 months.

In Phase Three, we conducted six focus groups with young people aged 1825 years; again recruited from ANU, CIT and Road Ready. The focus groups revealed that young people did not expect to be tested by police for drugs, and were not aware of the potential penalties. Consistent with the literature review and our survey, participants felt that many young people believed their driving to be improved as a result of marijuana use (causing the driver to travel slowly and more carefully) or speed and ecstasy use (increased alertness or reaction time). The focus groups provided us with specific recommendations for the key factors that need to be addressed in the development of an anti-drug driving campaign and several key considerations for creating an effective message.

In Phase Four, we contracted four groups of 3rd year graphic design students to develop a series of drug driving advertisements for posters, billboards and pamphlets, providing them with a design brief based on the formative research. Involving young people in the development of anti-drug driving messages was seen to be an effective way of developing messages that would resonate with the target group, without the high costs of contracting a commercial advertising agency.

In Phase Five, the nine different ads developed by the design teams were focus tested with six groups of young people, with discussions focusing on the credibility, relevance, likability and perceived effectiveness of the advertisements and their components (e.g., tagline, image, format).

In Phase Six, we selected the three highest-rated ads from the focus testing, along with three existing ads (one each from WA, Queensland and the UK), and recruited 459 young people (aged 18-25) to complete a quantitative survey, designed to capture the perceived impact of the advertisement messages on attitudes, knowledge, and intentions regarding drug-driving. Two of our test advertisements (“Drugs plus driving equals all of the above” and “One trip at a time”) clearly outperformed existing campaign messages in terms of being likable and realistic, and evoking the intended emotions. It is interesting to note that those advertisements most liked, and perceived as most realistic, by those in the target audience were those that made the majority feel nervous, scared and shocked – suggesting that perhaps this is an area of social marketing where invoking strong emotional responses may be appropriate.  This needs to be carefully done, however, as two of the existing campaigns (“The End” and “The Ecstasy and the Agony”) utilised high-fear ‘shock’ tactics but went too far beyond the target audience’s latitude of acceptance and were rated as not realistic (as well as not liked).

This research underscores the need for careful development and pre-testing of messages targeting behaviour change in the sophisticated young adult target group. 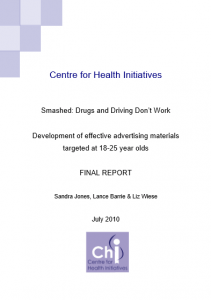