We’ve made great strides in improving heavy vehicle safety in Australia. But, as we face increasing demand for freight and development in our cities, it is timely to focus on the safety of our growing urban freight task. The good news is we don’t have to reinvent the wheel: much of what works is already happening overseas, and replicating best practice will bring great benefits for us too.

That’s the main message of new research that focusses on understanding and addressing road safety challenges with the urban freight task. As part of the research, Sydney Metro’s Road Transport Safety Advisor Michael Holmes looked at how other countries are tackling that challenge, including travelling to the UK, Europe and the US to see first-hand what schemes, policies, training programs, technologies and standards have been put in place to improve urban heavy vehicle safety.

In Australia, population growth and a multitude of major projects – think Sydney Metro and Melbourne Metro Tunnel – is increasing road freight across our major cities. This increases interaction between heavy vehicles and other road users, particularly pedestrians, cyclists and other vulnerable road users, introducing road safety risks for all groups.

It’s these heavy rigid vehicles that predominantly support the urban freight task, servicing the waste, construction and local distribution sectors, which has grown faster than any other freight task in Australia. 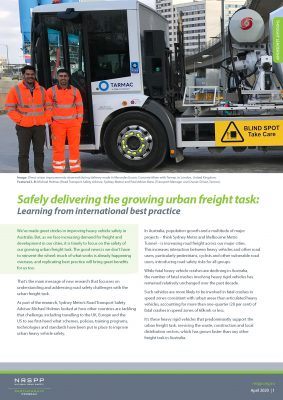