The purposes of this paper are:

It has been consistently found that the higher a vehicle’s travel speed (even when driving at or under the legal limit), the greater the likelihood of crashing and the more serious the crash outcomes1. Even relatively small changes in vehicle speed can result in substantial crash reductions. As an example: a study in Adelaide found that one-third of pedestrian fatalities would probably have survived if vehicles had been travelling only 5 km/h slower – and one in ten pedestrians would not have been hit at all2.

This association can be easily explained, as higher vehicle speeds: 

The recent reduction in the urban speed limits in Australian jurisdictions illustrates this association. Until 2001 the speed limit for local, neighbourhood streets in all Australian jurisdictions was generally 60 km/h. Jurisdictions then moved to a default 50 km/h limit, with the move having been closely evaluated for safety and other outcomes. The different evaluations consistently show that the lowered speed limit is associated with reduced crash numbers and reduced crash severity. In Western Australia for example4, reduced crash frequencies in metropolitan streets were found for: crashes involving pedestrians (51 percent reduction), crashes involving young drivers (19 percent) and crashes involving older drivers (18 percent) – with an overall reduction of 21 percent for all casualty crashes. It was also found that community support for the reduced limit increased once it was implemented, consistent with support for reduced excessive speeding in 50 km/h zones in both metropolitan Perth and regional Western Australia.

Many other studies can be cited to support the safety benefits of reduced speeds – and conversely, the increases in crashes that accompany increases in speed limits. Despite these findings, Australian and Western Australian speed limits, especially in urban areas, are amongst the highest in the world5. 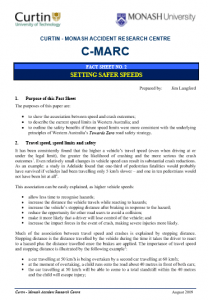