Within the United Kingdom (UK), between 2008 and 2013, 55 per cent of cyclist fatalities in London involved a heavy goods vehicle. A disproportionate number of these were construction vehicles. In 2012 Transport for London (TfL) commissioned an independent review of the construction sector’s transport activities to understand the causes of these collisions and how they might be prevented.

The resulting ‘Construction Logistics and Cyclist Safety’ (CLOCS) report was published in February 2013 by Transport Research Laboratory. In response to this report, the construction logistics industry demonstrated its commitment to change and identified actions in order to improve road safety which led to the establishment of a single standard, known as the “CLOCS Standard”.

Since the launch of the CLOCS Standard, the program and single code of practice has been identified as a world leading approach. The CLOCS Standard has expanded beyond London and across the United Kingdom (UK) due to its recognised benefits and evaluated success. The quality and standards of vehicles within the CLOCS Standard is maintained through TfL’s Fleet Operators Recognition Scheme (FORS).

Within Australia a number of major city-based infrastructure projects are underway and those responsible for these projects are equally concerned about the risk of heavy vehicle and vulnerable road user (VRU) interactions. Currently Sydney Metro and Victoria’s Major Transport Infrastructure Authority (MTIA) are leading Australian examples that have both individually applied portions of the CLOCS Standard to city projects.

The National Road Safety Partnership Program (NRSPP) commenced the leadership of bringing CLOCS to Australia in 2015 when the program was hosted by the Australian Road Research Board (ARRB) who developed the initial draft standard. The NRSPP has since shifted to Monash University Accident Research Centre (MUARC) where it formed a Steering Group (SG) to adapt the CLOCS Standard to the Australian environment and provide a consistent approach for infrastructure construction projects to mitigate VRU risks.

There would be a number of benefits arising from the establishment of a CLOCS Standard locally (known as “CLOCS-A”), including:

The SG seeks to be a catalyst that will guide the establishment of CLOCS-A and will operate nationally benefiting industry, the community and Government. To achieve this, the SG will first identify an organisation that is suitable to deliver CLOCS-A; and will then transfer the management of CLOCS-A and the Memorandum of Understanding (MoU).

CLOCS-A will be based on the CLOCS Standard but will focus on specific to issues in Australia.

This Memorandum of Understanding (MoU) records the agreement between the Parties (as listed in clause 13 or as subsequently amended from time to time) to form a relationship to work together in improving road safety and the operational efficiency relating to the logistics of the construction of infrastructure projects.

To this end, each Party:

This MoU includes a Supporting Party (SP) tier which includes the ability for other stakeholders to express their support for the establishment of CLOCS-A. A SP must provide a Letter of Commitment (Please refer to Appendix 1 for a template letter) which is reviewed by the SG prior to approval.

Recognition on the MoU 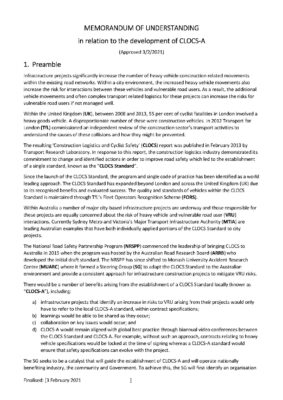