The only constant, someone once said, is change. Why, then, are we so afraid of change, and why is it so hard to effectively introduce something new. This Thought Leadership piece briefly outlines some key considerations in introducing a new policy, or any other change, in your organisation.

When it comes to change, we’re usually afraid of the uncertainty of the unknown rather than the change itself. That’s because, as Futureye’s Danial Abbas explains, change naturally triggers emotional or psychological responses in us. Those responses often lead us to fear the worst, feel a loss of control or set off our “outrage triggers”.

“What typically makes it worse, which makes people feel even more afraid or resentful, is these responses aren’t recognised, which means there’s little chance to engage in rational dialogue about what’s actually going to happen,” Daniel says.

“People are more concerned with the injustice of it and failure to recognise the things that trigger that emotional or psychological response to change. So they’re not able then to think along a rational narrative because they’re focused on that reaction, which is quite rational from a psychological point of view but not very rational when they look at the actual impact of the change.”

So, if you want to introduce a new policy or drive change in an organisation – and actually get people to act – how do you overcome this natural human resistance? The key is in the preparation or, as Daniel Abbas puts it, “it’s not what you say, it’s how you say it.” 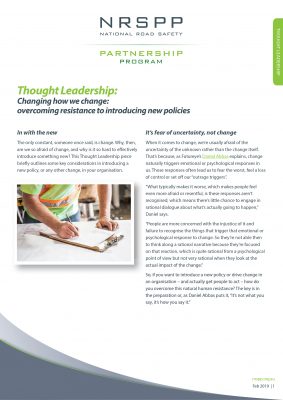