Background to this Study

Heavy vehicle crashes involving serious injuries and deaths are still occurring in large numbers in Australia and in many other countries. These serious injuries and deaths are preventable. However, while much is known about the causes of heavy vehicle related deaths and injuries, there is little knowledge about what kinds and combinations of management practices can best reduce the risk of these deaths and injuries.

At a regulatory level, governments have made efforts to reduce risk factors such as driver fatigue and unsafe driving speeds through legislation and enforcement of driver working hours and permissible speed limits. Moreover, there is a growing recognition of influences on truck drivers from within their companies and the industry more generally. The ‘chain of responsibility’ principle has now been adopted in Australian transport regulations, in addition to occupational health and safety regulations. Some governments have also encouraged the uptake of ‘alternative compliance’ schemes by allowing accreditation to the Australian Trucking Association’s TruckSafe program and/or adoption of the Australian Logistic Council’s National Logistics Safety Code, to be used as a ‘reasonable steps’ defence in occupational injury prosecution cases. However, these schemes have not yet been independently evaluated.

Until this study, much of road safety research had been founded on the epidemiological principles embodied in the two-dimensional Haddon Matrix (Haddon, 1968). This method of analysis has led to the development of many effective road safety interventions at a macro-societal level, such as random breath testing, road safety audits, and new car assessment programs. Those researching work related road safety have tried to adapt the Haddon Matrix, particularly in broadening the definition of “environmental factors” to include organisational factors (Murray et al., 2009; Runyan, 1998). However, it has been argued that this approach will always have limited value as it does not enable a dynamic systems analysis (Mooren et al., 2009; Salmon and Lenné, 2015). Using a systems approach, road injury risk factors could be understood as management system deficits that require a complex system strengthening response involving policy development and enforcement, work and journey planning, safety risk management education and other systematic management actions. The management system is characterised by a fluid interaction among managers, drivers and others within an organisation, as well as these interactions being influenced by external environmental systems (Stuckey et al., 2007). A paradigm shift in road safety thinking is needed and a systems approach provides that opportunity to think about solutions in a different way from the traditional method of applying a static epidemiological analysis of injury contribution factors.

Aims of the Study

The overall aim of the research was to develop a set of characteristics and practices relating to safety management that, if implemented, would be likely to produce better safety outcomes. Two specific objectives of this research were to:

This study has taken a systematic approach to gathering evidence about the practices of truck operators that distinguish companies with good safety results (lower crash outcomes) from those with poorer safety results. Instead of starting with injury factors identified from past crashes, the emphasis of this study was to identify management and organisational practices associated with good and less good safety outcomes. In other words, it examined comparatively approaches to managing injury risk rather than dissecting the risk itself and trying out ways of reducing the risk. The starting point was differing levels of risk environments and the discovery of differing features of risk management systems. The research was designed as three consecutive studies, each building on knowledge gained from the study carried out before.

Study 1 was a systematic scientific literature review that aimed to identify effective safety management practices and organisational characteristics associated with good safety performance in any industry sector. The aim was to find existing safety management practices that have shown evidence-based statistically significant associations with safety related outcomes. The Study produced a list of practices that might be expected to have links to positive safety outcomes (lower crash and injury rates) when applied to the heavy vehicle transport sector. The results from this Study were used to inform the choice of items to be tested in a survey of heavy vehicle transport operating companies (Study 2).

Study 3 was an in-depth qualitative investigation designed to validate the findings of the Study 2 survey. This research attempted to confirm or refute practices found in the previous study to distinguish between companies with lower and higher insurance claim rates identified in the survey. The collection of data involved interviews with managers who participated in the previous survey, collection or sighting of documents relevant to the practices of interest, making visual observations and interviewing drivers to find evidence of those distinguishing practices.

In this précis, the analysis of all data collected in Studies 1, 2 and 3 is used to develop a safety management system that is suitable for implementing in companies that operate heavy trucks that should reduce crash outcomes. This research is important because there has been no previous attempt to develop an SMS for this industry. Furthermore, there have been few attempts to develop an evidence-based SMS with a validated set of safety management characteristics for any industry. 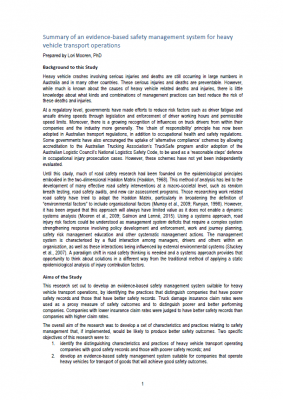