With funding from the DfT’s road safety partnership grant, and with the help of a working group including the DfT, DSA, Buckinghamshire and Lancashire County Councils, Birmingham City Council and Roadsafe, RoSPA conducted a ‘Young Drivers at Work Study’ among employers who have young staff (17-24 years) who drive as part of their work and young at-work drivers themselves.

The ‘Young Drivers at Work Study’ was phase I of a two-part project.

The study comprised individual interviews with employers and managers of young at-work drivers, a questionnaire survey of a wide range of employers, and a number of focus groups with young drivers who drove as part of their job. Chapter two outlines the methodology of the report.

The study explored whether employers, and young drivers, thought that learner driver training, and the driving test, provides young drivers with the knowledge, skills and attitudes they need when driving for work (as opposed to driving for their own private purposes). It also sought to assess whether employers, and young at-work drivers, would value and use additional ‘driving for work’ qualifications, and if so, what should be included in such a qualification and the most suitable format(s) and method(s) of delivery.

Framework, their responses could be matched to elements in the framework. 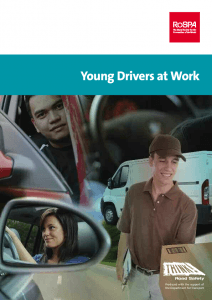 Author
Royal Society for the Prevention of Accidents