Australian workplaces have recorded the lowest number of fatalities in 11 years according to data released by Safe Work Australia today in the report Work-related Traumatic Fatalities, Australia 2014.

The annual report found that 191 workers died from injuries received at work in 2013.

In releasing the report Safe Work Australia’s Acting Chief Executive Officer, Michelle Baxter urged all workers whether employed by a business or self-employed to make work health and safety a priority.

“While we have seen a 16 per cent reduction in work-related deaths since 2012 (228), this does not mean workers should become complacent about reducing and eliminating risks while working,” said Ms Baxter.

“In particular it is alarming to see the fatality rate for self-employed workers is so much higher than for employees.

“This report serves as a reminder that self-employed workers still have the same legal requirements as an employer to ensure their own health and safety is maintained while at work, as well as the safety of people entering their workplace.

“Even if a worker is conducting a business in their own right, they should not ignore their own health and safety.” 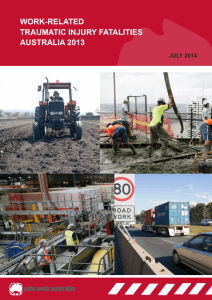