Work Health and Safety in the Road Freight Transport Industry

The road freight transport sector is notorious for its high worker fatality rate, but its average claims costs and time lost to injuries – such as sprains and contusions – are also consistently higher than all other industries, a new Safe Work Australia report shows.

The report, Work Health and Safety in the Road Freight Transport Industry, shows there were 352 work-related fatalities in the sector in the eight years to June 2011.

(Note: the fatality rate among all truck drivers is likely to be far higher than 18.6 per 100,000 workers, with truck drivers employed by construction companies, mining companies or retailers with their own fleets, for example, being excluded from the road freight transport classification.)

Of the 352 deaths, 275 (78%) occurred while the decedent was driving or being driven on a public road, with hitting stationary objects (97 deaths) and rollovers (76) being the most common causes.

“The main work health and safety hazards impacting on drivers who have to deliver their load over long distances are fatigue and tight schedules that may encourage speeding,” the report says.

Of the 77 deaths that occurred away from public roads, 49 occurred while loading or unloading vehicles (by being hit by falling objects, being trapped between moving and stationary objects, falling from height or contacting electricity, for example), while 12 occurred during repair and maintenance tasks.

According to the report, sprains and strains of joints and adjacent muscles (44.5%) were the most common causes of compensable injuries in the sector, followed by fractures (12.6%) and contusions or crushes (8.4%), with most non-fatal injuries occurring away from public roads.

Lifting or carrying objects (18.9%) such as cartons and drums was the most common mechanism, followed by handling objects (14.9%), falls from height (13.2%) and falls on the same level (11 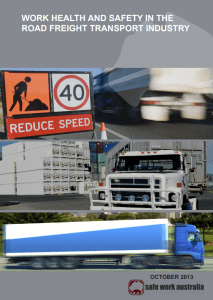