Vision Zero – An ethical approach to safety and mobility

Vision Zero is a philosophy of road safety that eventually no one will be killed or seriously injured within the road transport system. This paper describes Vision Zero and its view that safety cannot be traded for mobility. The applicability of Vision Zero to Victoria in the short- and long-term is discussed.

In October 1997, the Road Traffic Safety Bill founded on Vision Zero was passed by a large majority in the Swedish parliament. The Vision Zero is that eventually no one will be killed or seriously injured within the road transport system (Ministry of Transport and Communications, 1997). The Vision is an expression of the ethical imperative that  It can never be ethically acceptable that people are killed or seriously injured when moving within the road transport system.

Vision Zero addresses fatalities and those injuries where the victim does not physically recover within a certain period of time. This means that common, but not long-term disabling injuries, and non-injury accidents are more or less outside the scope of the Vision.

Vision Zero provides a vision of a safe road transport system which can be used to guide the selection of strategies and then the setting of goals and targets. Zero is not a target to be achieved by a certain date. It is a change from an emphasis on current problems and possible ways of reducing these to being guided by what the optimum state of the road transport system should be.

Vision Zero also changes the emphasis in responsibility for road traffic safety. In all current road transport systems, the road user has almost total responsibility for safety. In most countries, there are general rules that the road user should behave in such a way that accidents are avoided. If an accident occurs, at least one road user has, by definition, broken the general rule and the legal system can therefore act.

In contrast, Vision Zero explicitly states that the responsibility is shared by the system designers and the road user:

‘Ethical rules’ have been proposed to guide the system designers. Two of these are: 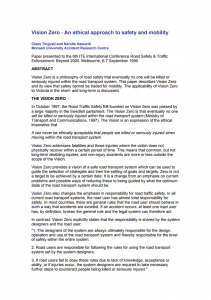