This Thought Leadership Piece focuses on exploring the Response to common brain condition, depression – in the heavy vehicle sector. The aim is to help break down perceived boundaries which will reduce the stigma attached to depression. The end result is a more productive workforce and safer roads.

Imagine that for every 10 of your friends, family and workmates, at least one had a medical condition that affected their mood and made them and those around them less safe and less productive. Imagine that condition was easily treatable, usually for free, and that employers who invested in preventing it received a 200% return on investment.

The condition is depression and, according to an expert on depression in the transport industry, the longer we continue to attach stigma to the condition, the longer our friends, family and workmates will suffer in silence and the more dangerous our roads and workplaces will be.

Depression has become more widely accepted and discussed in Australian society. Unfortunately, that has not translated to some male-dominated industries, including trucking and wider transport industry.

Truck drivers are more likely to be among the 350 million people worldwide with depression because of the specific workplace factors they face, including working long hours, long periods alone, fatigue, and inconsistent work and rest times. The bad news is that depression reduces driving performance and reaction time, with heavy vehicle drivers suffering from depression seven times more likely to be involved in a crash. That not only increases their risk of death or injury but that of other road users.

The good news is that depression can be effectively managed. 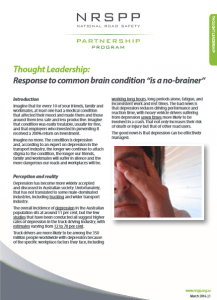