The Dangers of Distracted Driving

The following resource was taken from Daily Wireless: The Dangers of Distracted Driving.

Cases involving distracted driving having risen sharply over the past two decades. In 2018, around 400,000 injuries and more than 2,800 fatalities were caused in the US due to drivers being distracted. While there are other forms of distraction, including eating and drinking, the use of handheld devices to talk, text, or navigate, is the most common reason drivers take their eyes and mind off the road.

Over the years, tougher laws and penalties have been put in place to deter people from distracted driving. What’s more, technology has improved such that devices themselves can help users avoid things like texting and entering navigation instructions while driving.

In this post, we discuss more statistics surrounding distracted driving, the laws in place, and some tips to help ensure you stay safe on the road.

According to the US Department of Transportation, there are three types of distracted driving: visual, manual, and cognitive.

Texting while driving is one of the most dangerous forms of distracted driving because it hits on all three types of distractions. According to the Centers for Disease Control and Prevention (CDC), sending or reading text messages forces you to stop looking at the road for around five seconds. Driving at 55 mph, you can go the length of a football field within this time.

Note that it’s difficult to collect accurate data with respect to the true number of cases of distracted driving. This is largely due to the fact that many drivers conceal device use, such that it can’t be detected by law enforcement officers. What’s more, due to privacy laws, it’s difficult for law enforcement to gather phone records or other data that could prove someone was using a device at the time of an accident.

In 2001, New York was the first state to institute a ban on hand-held phone conversations while driving. There are now similar bans in 23 states and partial bans in six other states. Partial bans vary in their nature. For example, in Wisconsin, the ban only applies in highway construction areas. In Arkansas, it applies to school and highway work zones and at all times for drivers aged 18–20. 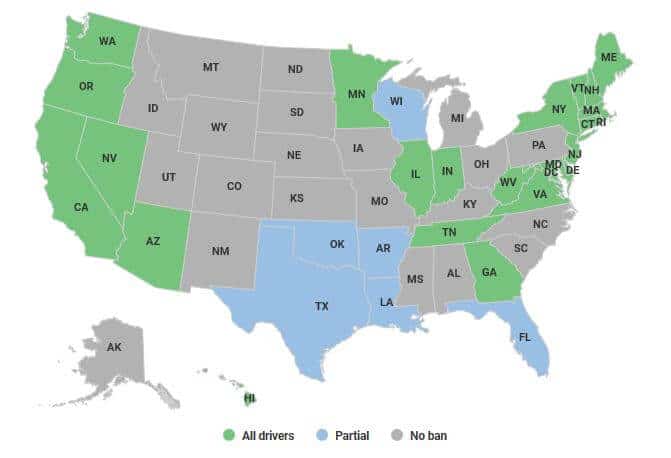 States with a full or partial ban on using handheld devices while driving. (Source: Insurance Institute for Highway Safety)

Cellphones are completely banned in some states for some drivers, including young drivers (39 states) and school bus drivers (22 states).

Texting while driving bans are more widespread, with all states except Montana and Missouri placing an outright ban on text messaging while driving. Montana has no ban at all while Missouri bans texting for drivers aged 21 years or younger.

The penalty for distracted driving is typically a fine, in some cases administered in conjunction with demerit points added to the driver’s record. However, these penalties vary greatly depending on which state you’re in. For example, in California, the penalty for texting while driving is a $25 fine, or $50 for a second offense. In Alaska, texting while driving is a misdemeanor and a violation could result in a $10,000 fine and up to one year in prison.

For drivers in Australia, it’s illegal to text or email while driving. Phone calls are allowed but only if the device is not being held by the driver, and making a call doesn’t require the driver to manipulate the device physically in any way, for example, by pressing a button. This also applies to emergency calls.

If a device is being used for GPS purposes, it must be securely affixed to the vehicle in a mounting that is designed for that purpose. Motorcyclists are not allowed to use GPS devices, including mobile phones, that are strapped to their arm or another body part.

The penalty for using a mobile device while driving is around $500 AUD and three or four demerit points, depending on the specific activity.

Canada’s distracted driving laws vary by province but generally, the laws prohibit drivers from using a handheld communication device to text or dial while driving. However, you may touch a device in the event of an emergency in order to call 911.

You can use a GPS device but you can only program it using voice commands while driving. As in Australia, the law stipulates that the device must be securely mounted to the vehicle (or built into the dashboard).

The penalties for distracted driving vary too, and may include fines up to $1,200 CAD, up to six demerit points, and a license suspension lasting up to 12 months.

Other activities such as drinking, eating, smoking, grooming and reading are incorporated in some provinces’ distracted driving laws. In other provinces, they are part of careless or dangerous driving laws.

For UK drivers, it’s illegal to hold a phone or sat nav (GPS device) when driving a car or riding a motorcycle. You can talk on the phone provided access is hands-free and the device doesn’t block your view.

You can use a handheld device while driving if it’s an emergency and you need to call 999, but only if it’s impractical or unsafe to stop first.

The punishment for breaking these laws is up to six penalty (demerit) points and a fine up to £200. Drivers who have recently passed their test (within the last two years) may also lose their license. Some cases may be taken to court, where drivers could be fined up to £1,000 (£2,500 for lorry or bus drivers) or banned from driving. 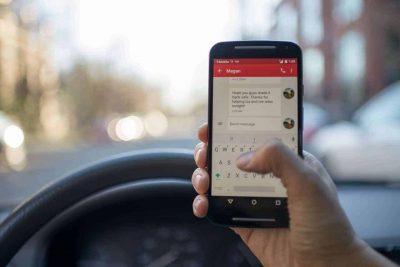