This study aims to document objectively the relationship between vehicle speed and crash risks. It assesses to what extent recent changes in speed limits or the wide-scale introduction of automated speed enforcement have moderated actual average speeds, and whether this has delivered the safety impacts that theoretical models of the relationship between speed and crashes suggest. The cases analysed come from ten countries: Australia, Austria, Denmark, France, Hungary, Israel, Italy, Norway, Sweden and the United States. The report was prepared by the ITF’s permanent working group on road safety, the International Traffic Safety Data and Analysis Group (IRTAD).

To reduce road trauma, governments need to take actions that will reduce the speed on roads as well as speed differences between vehicles sharing the same road. For individuals, the risks of a severe crash might seem small, but from a societal point of view there are substantial safety gains from reducing mean speeds on roads.

The design of the road system and the speed limits set for it must consider the forces the human body can tolerate and survive. Working towards a Safe System, reasonable speed limits are 30 km/h in built up areas where there is a mix of vulnerable road users and motor vehicle traffic. In other areas with intersections and high risk of side collisions 50 km/h is appropriate. On rural roads without a median barrier to reduce the risk of head-on collisions, a speed limit of 70 km/h is appropriate. In urban areas, speeds above 50 km/h are not acceptable, with the exception of limited access arterial roads with no interaction with non-motorised traffic. Where motorised vehicles and vulnerable road users share the same space, such as in residential areas, 30 km/h is the recommended maximum.

Improve infrastructure and enforcement if speed limits are to be increased

If an increase in the speed limit is envisaged, stricter enforcement or an upgrade of the infrastructure is recommended to compensate for the increased risk from higher mean speed. Without such compensatory measures, more deaths and more injured road users can be expected.

Experience worldwide has proven the effectiveness of automatic speed control systems in reducing speed, and in turn road crash frequency. Section control (using measurement of average speed over a section of road) is a relatively new measure, which seems to be very effective not only in reducing speed but also in contributing to more homogenised traffic flow. 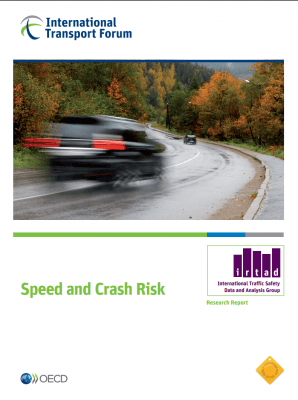