Since 2008, the AAA Foundation for Traffic Safety has conducted annual surveys of the American public in order to benchmark and track the nation’s traffic safety culture, with the goal of one day obtaining a “social climate in which traffic safety is highly valued and rigorously pursued.” The core questions of this Traffic Safety Culture Index address three broad realms: perceived threats of various hazards (e.g., drunk drivers); perceived acceptability of a range of behaviors (e.g., driving while drowsy); and self-reported frequency of engaging in risky activities behind the wheel (e.g., texting or emailing).

One of the central findings of the survey each year has been a prevailing attitude among the nation’s drivers that can best be characterized by the phrase, “do as I say, not as I do.” This is because high numbers of people routinely admit to engaging in the very same risky behaviors that they say constitute a threat to personal safety, and for which they condemn other drivers. Distracted driving is a prime example of this. An analysis of the four most recent surveys (2009-2012), for instance, found that while more than eight in ten drivers believed it was completely unacceptable for a motorist to text or email behind the wheel, more than a third admitted to reading messages while driving, and more than a quarter reported sending them (in the previous 30 days).

While most behaviors covered on the survey (e.g., speeding on residential streets, using the internet while driving, red light running, etc.) are perceived as a threat by a majority of respondents, one notable exception is driver use of hands-free devices. An analysis of the 2012 Traffic Safety Culture Index distraction data found that while 66 percent of licensed drivers believed motorist use of hand-held cell phones was somewhat or completely unacceptable, more than half (56.2%) believed using hands-free devices was somewhat or completely acceptable.3 This is consistent with the fact that nearly three quarters said they believed hands-free devices were somewhat or much safer than their hand-held counterparts.

This general public perception has been matched by a proliferation of increasingly-sophisticated speech-based infotainment and communications systems in new vehicles – many of which are marketed as safe by virtue of being hands-free – as well as a lack of legislative or regulatory action against driver use of hands-free technologies.* However, a June 2013 study by the AAA Foundation and the University of Utah affirmed earlier studies, challenged the public perception, and concluded that “hands-free” doesn’t mean “risk-free,” due to the effects of cognitive distraction.

Across three experiments – in a laboratory, a driving simulator, and an instrumented vehicle – researchers found that even when drivers kept their eyes on the road and hands on the wheel, performing “hands-free” secondary (non-driving) tasks – such as conversing with a passenger, listening to a book on tape, or interacting with an on-board speech-to-text email system – degraded driving performance, slowed reaction times, and suppressed brain activity in the areas needed for safe driving. Ultimately, the study created a rating system ranking the tasks according to the amount of cognitive distraction they caused. Contrary to prevailing assumptions, conversing on a hands-free phone produced the same amount of mental workload as did using a hand-held device, and driver interaction with an entirely hands-free in-vehicle email system produced the highest level of cognitive distraction.

In light of this, the AAA Foundation expanded its slate of questions for the 2013 safety culture survey that pertained to distracted driving, hands-free communications, and voice-activated and other in-vehicle technologies. The objective was to gain a deeper understanding of public perceptions of cognitive distraction and the hands-free debate, and investigate whether there have been any changes over the past year in these areas.

As in previous years, the data demonstrate a “do as I say, not as I do” attitude pertaining to distracted driving, and indicate a continued public perception that hands-free devices offer safety benefits over their hand-held counterparts. Moreover, although distracted driving remains a public concern and a prevalent behavior in 2013, there are substantial differences between age groups related to perceived threats from, acceptance of, and engagement in distracting behaviors behind the wheels. 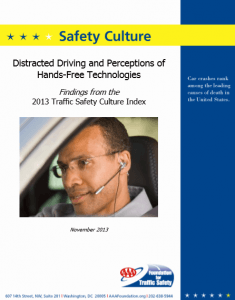