Drivers have a range of reasons for not using a seat belt in a truck, but in the car, they would automatically put on a seat belt. Much research and studies over the years have pointed to seat belts reducing the risk of injury and fatality for all road users.

When asked, the common response for not wearing a seatbelt when driving a heavy vehicle was that drivers considered them uncomfortable. This is historically due to the use of suspension seats with cab mounted belts locking during driving over rough roads.

The safety alert lists the availability of integrated seat belts with the driver’s suspension seat for heavy vehicles. By providing details on what is currently available to industry, our safety alert is intended to increase seat belt use and save lives.

The incident or issue:

It is widely accepted that the use of seat belts by commercial vehicle drivers, although growing, is lower than is acceptable. Anecdotal reports that cloths pegs are still being used to restrict a belt’s travel have been received. Recent research has confirmed one third (33%) of heavy truck drivers killed in single vehicle heavy truck crashes were not wearing an available restraint.[1] Drivers have a range of excuses for not using a seat belt in a truck, but in a car, would automatically put on a seat belt. This issue is partly due to historical reasons where the seat belt was B pillar mounted on the cab’s frame, often resulting in the driver being tightly locked down into the suspension seat. Another reason has been that not using a belt potentially allows the driver to jump from the truck in the event of a crash. However modern trucks have cab suspension, rear air bag suspension and long parabolic front springs providing a smooth ride for the driver and cargo. They simply do not buck and bounce as the trucks of old. The industry standard seat now has suspension. It is not working that hard while providing improved levels comfort and reduced fatigue.

The following table lists the heavy truck brands (GVM greater than 16 tonne), that have available an integrated seat belt with the driver’s suspension seat, which eliminates one of the excuses for not wearing a seat belt.

¨         Ensure the vehicle is maintained and the seat with belt is in good working order.

¨         Selected seat belt’s, either seat or B-pillar mounted, may be able to be retro fitted with a seat belt reminder system. However, seat belt warnings will be ineffective if the driver’s use ‘belt extensions’ or are connecting the seat belt and sitting on them. 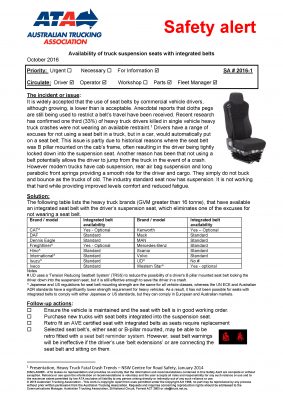