What is the background to road safety in WA?

The long-term vision of Towards Zero, WA’s Road Safety Strategy 2008 – 2020, is of a road transport  system where crashes resulting in death or serious injury are virtually eliminated. Towards Zero aligns  with the safe system approach and was endorsed after consultation with the Local Government  sector by the Western Australian Local Government Association (WALGA) State Council in April  2008. The Towards Zero strategy was subsequently endorsed by the State Government in March  2009, following comprehensive consultation with road safety partners and the community.

The Towards Zero vision is to eliminate death and serious injury within the road network by creating  a safe system that accommodates human error and the vulnerability of the human body. This is achievable through a shared responsibility approach involving governments, non-government organisations, the private sector and the community to implement evidence-based measures that  address safe road users, safe roads and roadsides, safe speeds, and safe vehicles.

The safe system approach is a holistic view of road safety, which has resulted in a major shift from  the road users to those who design, build and maintain the transport system. For road authorities,  including Local Governments, planning and developing a safe transport system means looking beyond set standards and moving past the traditional role of constructing and maintaining roads; it means using safe system treatments and countermeasures so that when people do make mistakes on the road network the outcome is less likely to result in death or serious injury. Along with the construction and maintenance of roads, Local Governments can influence road safety outcomes across each of the safe system cornerstones through their responsibilities as a road authority, planning authority, employer and fleet operator.

WALGA’s Local Government Safe System Project (LGSSP) evolved from this significant shift in the  approach to road safety at a National, State and Local Government level. With funding from the  Road Trauma Trust Account, the LGSSP was established in May 2009. The goal of the project is  to increase the uptake of safe system principles by Local Governments. The development of the  Safe System Guiding Principles for Local Government, facilitated by the LGSSP, was undertaken to provide guidance and assistance to Local Governments as they work towards the safe system approach, which will support the implementation of Towards Zero at a local level.

The Safe System Guiding Principles for Local Government were developed to: 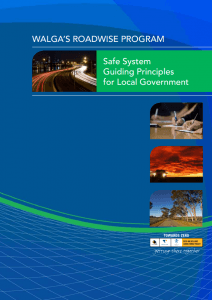