This document has been compiled to highlight and summarise the safety aspects of motorways as a sub-category of roads, primarily in the United Kingdom. In particular exploring serious accidents on motorways and monotonous roads.

Motorways are statistically the safest road types; however, there are a number of key sub-topics relating to motorway safety which are currently subject to global debate.

The purpose of this document is to provide the reader with an overview of these sub-topics and provide an entry for further reading. Therefore, this synthesis has been summarised broadly into the following areas:

Managed Motorways and Hard Shoulder Running techniques are used to effectively increase the capacity of a motorway without the need to construct extra lanes. This provides a cost-effective solution to motorways that suffer from congestion at peak times. Such schemes installed on the M42 and on motorways in The Netherlands showed a dramatic decrease in the number of Road Traffic Incidents (RTIs) and fatalities. However, it is also argued that the lack of a hard shoulder in these instances can substantially increase the cost per accident of Killed or Seriously Injured (KSI) RTIs.

Excessive speed on motorways is also a major issue. Vehicles exceeding motorway speed limits are a major problem in many countries. In Germany, many of the motorways do not have speed limits or only have temporary speed limits imposed at peak running times. Whilst German motorways are regarded as some of the most safely engineered roads in Europe, the country ranks eighth highest in terms of deaths per billion vehicle kilometres on motorways in Europe. It is therefore argued that decreasing speed on motorways has shown a significant reduction in rates of RTI, despite the steady increase in the volume of traffic on motorways over the past decade.

Motorways are notorious for providing a monotonous driving environment due to their form (few junctions, unidirectional flow, minimal conflict) and the constantly flowing nature of the roads. This means that fatigue or tiredness in drivers on motorways is more prevalent when compared to other road types. Drivers of Large Goods Vehicles (LGVs) can experience these effects more than drivers of other vehicles due to the large distances involved whilst in transit. It was shown that driving in the early hours of the morning and during the middle of the afternoon are the worst times for fatigue related RTIs, probably due to the lack of traffic on the roads at the time combined with the natural Circadian Rhythms of the human body.

Lighting on motorways is an issue that is currently under debate. It can be argued that switching off lighting on motorways during the late night hours can save up to 20 per cent on usage costs. However, despite the fact that motorway lighting may or may not reduce the potential for night time RTIs, it can be of major assistance to the emergency services.

RTIs in motorway tunnels which result in KSI are shown to be disproportionately high compared to the remainder of the motorway network in the Netherlands. However, it was shown that by introducing sectional control or average speed cameras in a motorway tunnel in Austria reduced RTIs by 33 per cent over a two year period. 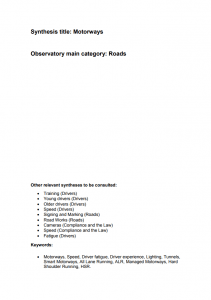