Driving under the influence of psychoactive drugs leads to deaths and serious injuries on Europe’s roads. Both illicit and licit drugs can disrupt the psychological state of the driver and impair their driving performance. Using multiple drugs simultaneously, or in conjunction with alcohol, increases the risk of a collision even further.

Drug driving remains significantly less well understood than drink driving. It is only in recent years that knowledge of drug driving has begun to improve, with large scale studies such as the DRUID project beginning to reveal the scale and impact of drug driving in Europe.

This report aims to provide a summary of drug driving across Europe, drawing on the latest research to provide an overview of how drugs affect collision risk and the prevalence of different types of drugs in different road users and regions.

It summarises various approaches to combatting drug driving from around Europe and the ways in which they can be used to help tackle both drug driving itself and other underlying issues related to drug use.

Educational and awareness campaigns are used by many countries to highlight the dangers of driving under the influence of psychoactive drugs and to educate the public about the effects they can have and the consequences drug driving can lead to. These approaches can be targeted at those groups amongst which drug driving is known to be prevalent.

Rehabilitation and healthcare provide pathways for offenders to return to driving while also helping to reduce the likelihood of recidivism. Schemes vary from country to country and by the type of offender. Some forms of rehabilitation are handled primarily by driver licensing authorities, whereas others are more healthcare oriented. 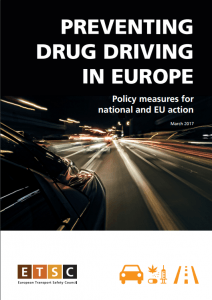 Author
PRAISE: Preventing Road Accidents and Injuries for the Safety of Employees