NRSPP Thought Leadership: Safer vehicles, safer roads: How are your people getting to work?

If anyone knows about the importance of safer vehicles in reducing road injuries and fatalities, it would be emergency first responders who deal with road trauma on a daily basis.

New research on the personal attitudes of police officers towards vehicle safety put that to the test, with some surprising results.

In Search of Answers

When the head of the NSW Centre for Road Safety told a road police forum that only one-third of light vehicles in NSW had a 5-star ANCAP rating, it got the audience’s attention. Around the same time, two local Highway Patrol officers were injured in separate road crashes on their way to work.

Those events, and the fact 5-star safety ratings are mandated for Highway Patrol cars in NSW and the fleet travels 25 million kilometres every year, got NSW Police Snr. Sgt. Mick Timms thinking: “we give people a 5-star rated vehicle when they’re at work, but what are they actually driving to work in?”

So the Work Health Safety Officer for Traffic and Highway Patrol Command (THPC) put together a survey of the 1400-strong NSW unit to answer:

Road crashes are the leading cause of work-related deaths in Australia, and older vehicles are over-represented in crashstatistics. In line with Safer Systems thinking, safer vehicles reduce the risk of a crash and severity of the injury. Analysis of an 18-day Christmas-New Year holiday NSW traffic operation, for example, showed 19 out of 21 passenger vehicles in which a person was killed were not 5-star ANCAP rated; the vehicles’ average age was 14 years, well above the national private fleet average.

The online survey asked about the safety level of private vehicles THPC workers use, their attitudes to vehicle safety, the safety of vehicles used by younger drivers in their family, and barriers to accessing safer vehicles. It found:

The survey showed cost was a major barrier to purchasing 5-star ANCAP rated vehicles for private use, even in a profession with above-average earnings, Snr. Sgt. Mick Timms said.

He adds that while there are costs for families in purchasing safer cars, costs to society from driving older, less safe cars include hospitalisations, injuries, and fatalities. There are also costs to employers, through lost productivity, worker absences, workers compensation, and recruiting and training new staff.

So it is also in employers’ best interests to encourage their workforce to choose 5-star ANCAP rated vehicles for their daily commute.

“The simple message is driving the safest possible vehicle is an effective way to reduce road deaths and serious injuries.”

A member of the NSW Police Force since 1987, Senior Sergeant Mick Timms is Work Health Safety-Due Diligence Officer for Traffic and Highway Patrol Command. Specialising in Highway Patrol and road policing for 30 years, he has held a range of operational and management positions.

NSW Police invites organisations to use the survey to understand what their workers are driving to work. This can act as a conversation seed for understanding why safer vehicles matter.

For more information or to access the survey, visit: NSW Police is my house in order survey which explores the personal attitudes of police officers towards vehicle safety 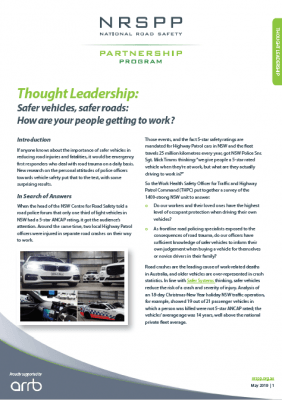