This Thought Leadership article aims to raise awareness of the dangers of increased crash risk in High Occupancy Vehicles (HOVs) and the potential for injury or fatality in the event of a HOVs crash. This document provides a definition of high occupancy vehicles, injury statistics, rollover risk,
and safety technologies available along with strategies to prevent rollovers and ensure safer HOV activities.

What is a High Occupancy Vehicle?

A High Occupancy Vehicle (HOV) is an on-road vehicle which carries 9 to approx. 25/30 passengers and is below heavy vehicle classification of 4.5 tonnes.

Why are HOVs a problem?

HOV passengers are more than three times as likely to die in a rollover event than those of ordinary passenger cars.

Almost all road crashes are caused by, or involve, human error.

Within the Thougt Leadership Paper the graph shows the most common crash events for fatal HOV crashes in Australia.

In the event of a crash, HOV’s have a high propensity to result in a rollover, however, this rate triples as the number of occupants in the vehicle increase.

The higher the speed of the HOV, and the tighter the turn it is trying to make, the more likely the driver is to lose control of the vehicle and for a vehicle rollover to occur. As can be seen in the diagram, the overturning force of the HOV increases as speed increase.

The Thought Leadership Paper goes on to explore: 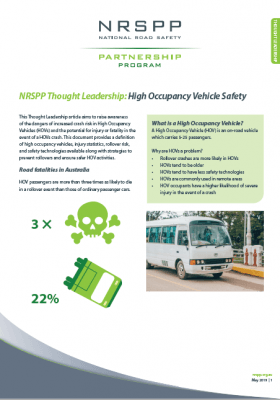