This statement is usually made in support of keeping a 100km/h speed limit on roads that already have that speed limit.

In Myth 4 we noted that, historically, speed limits on roads were set according to a road hierarchy based mainly on speed and mobility. There was less consideration of the safety benefits of adopting lower speeds. In the early days there was only a limited understanding of safety in relation to crash severity, vehicle occupant protection and vulnerable road users.

This has left a legacy where people are accustomed to travelling on some roads where the speed limits are incompatible with achieving zero road trauma. Where high speed roads have the best/safest road infrastructure, the driver is alert and driving competently, and the vehicle is of a high safety standard then 100km/h may be a safe default speed limit. But until all of these factors are consistently in place there is no basis to assert that 100km/h is the right default speed limit.

Many 100km/h roads have evolved over time and are carrying larger volumes of traffic than ever before. They were not designed as high speed roads. Often winding, hilly, lined with trees, poles and ditches, they are largely unsuited to high speed travel. They pose high risks to drivers and passengers if they are involved in a crash. Under Victoria’s Towards Zero road safety strategy such risk levels are no longer acceptable. Getting to a point where people drive responsibly and without error will take time, noting that the latter is never fully achievable. Upgrading infrastructure takes time and money, and may not be affordable for the whole network. In the meantime, a more appropriate speed for these types of roads would be 80km/h.

There are arguments that lower speed limits increase travel times. They will for those travelling long uninterrupted journeys, but not all journey on 100 km/h roads are long, or uninterrupted. The lower speed limit would have benefits for commercial operation, such as lower fuel and maintenance costs and reduced frequency of crashes (lower insurance premiums and lost time). There are also the environmental benefits of reductions in greenhouse gases, pollutants and noise.]

The argument in favour of lowering the default speed limit on some roads is overwhelming. The potential for reduction in fatal and injury crashes, if the speed limit is lowered by 20km/h is significant – See Myth 2 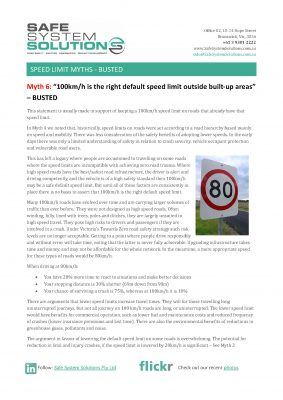