Marijuana Use and Highway Safety

Marijuana Use and Highway Safety

A growing number of Americans report that they use marijuana. Most states now allow the use of marijuana for treatment of medical conditions. Ten states and the District of Columbia, representing a quarter of the U.S. population, have decriminalized the recreational use of marijuana, and other states are considering following suit.

As the opportunity for legal use of marijuana grows, there is concern about the impact of marijuana usage on highway safety. In a 2018 survey, the majority of state highway safety officers considered drugged driving an issue at least as important as driving while impaired by alcohol (which is associated with over 10,000 highway deaths each year). As of May 2019, 18 states have enacted laws declaring that a specified concentration of THC in a driver’s body constitutes evidence of impairment and is inherently illegal (referred to as per se laws), similar to the .08% blood alcohol content (BAC) standard of alcohol impairment.

Advocates of loosening restrictions on marijuana often compare marijuana usage to drinking alcohol, which may contribute to some stakeholders viewing marijuana use and driving as similar to alcohol’s impairment of driving. Research studies indicate that marijuana’s effects on drivers’ performance may vary from the effects of alcohol, in ways that challenge dealing with marijuana impairment and driving similarly to alcohol-impaired driving.

Alcohol is a nervous system depressant that is absorbed into the blood and metabolized by the body fairly quickly, such that there is little trace of alcohol after 24 hours. Its impairing effects have been extensively studied over many decades, and the association between levels of alcohol consumption and degrees of impairment is well-established. By contrast, marijuana is a nervous system stimulant. It contains over 500 chemical compounds, only one of which, tetrahydrocannabinol (THC), is significantly psychoactive. Its effects are felt quickly after smoking, but more slowly when consumed in other forms (e.g., in food). It is metabolized quickly, but the body can store THC in fat cells, so that traces of THC can be found up to several weeks after consumption. Its impairing effects have been the subject of limited study, due in part to its status as a controlled substance under federal law.

Although laboratory studies have shown that marijuana consumption can affect a person’s response times and motor performance, studies of the impact of marijuana consumption on a driver’s risk of being involved in a crash have produced conflicting results, with some studies finding little or no increased risk of a crash from marijuana usage. Levels of impairment that can be identified in laboratory settings may not have a significant impact in real-world settings, where many variables affect the likelihood of a crash occurring. Research studies have been unable to consistently correlate levels of
marijuana consumption, or THC in a person’s body, and levels of impairment. Thus some researchers, and the National Highway Traffic Safety Administration, have observed that using a measure of THC as evidence of a driver’s impairment is not supported by scientific evidence to date.

Congress, state legislatures, and other decisionmakers may address the topic of marijuana use and driver impairment through various policy options, including whether or not to support additional research on the impact of marijuana on driver performance and on measurement techniques for marijuana impairment, as well as training for law enforcement on identifying marijuana impairment. Other deliberations may address federal regulations on marijuana use and testing for transportation safety-sensitive employees. 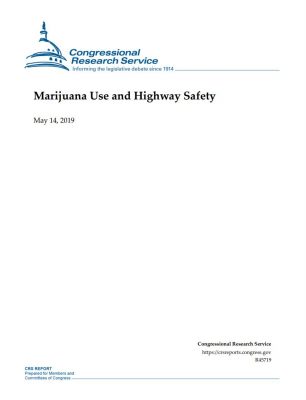