The number of infringement notices issued by OHS regulators dropped by 37 per cent in the 12 months to June 2012, while the number of prohibition and improvement notices also decreased, a new Safe Work Australia statistics report has shown.

The report also shows the agriculture, forestry and fishing industry; manufacturing industry; and transport and storage sector continued to have the highest serious injury incidence rates of 21.9, 20.9 and 20.8 per 1000 workers respectively in 2011-12.

Labourers, transport workers and tradespersons had the highest serious injury incidence rates of all occupations, with rates of 30.4, 25.9 and 20.6 per 1000 workers respectively.

The most common work-related injuries compensated during the same period were sprains and strains, which accounted for 42.4 per cent of all serious injury claims.

“Body stressing, falls, trips and slips of a person and being hit by a moving object were the mechanisms of work-related injury or disease responsible for 75 per cent of serious workers’ compensation claims in 2011-12,” the report says.

Unsurprisingly, the agriculture, forestry and fishing industry had the highest number of deaths (60) and the highest fatality rate (17.93 deaths per 100,000 workers), which is nine times the all-industries rate of 1.99.

The transport, postal and warehousing industry came next, with 51 deaths and a fatality rate of 9.02 deaths per 100,000 workers.

Nearly 100 workers died in a vehicle incident or rollover in 2011-12, and 30 workers died after being hit by falling objects, the report found. 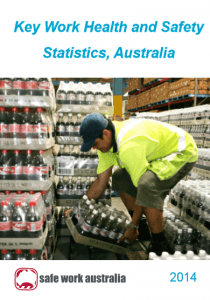