On 8 September 2017 an inquiry into the National Road Safety Strategy 2011–2020 was announced by the then federal transport minister Darren Chester.

A panel of four was convened to conduct the inquiry. It was co-chaired by Associate Professor Jeremy Woolley, Director of the Centre for Automotive Safety Research at the University of Adelaide, and Dr John Crozier, Chair of the Trauma Committee at the Royal Australasian College of Surgeons.

A summary list of contributing participants, forums, workshops and submissions is included in this report’s appendices. Submissions (where permission was granted to upload) can be viewed online at the Department of Infrastructure, Regional Development and Cities website.

Given the broad terms of reference, it must be noted that resourcing was limited and that a detailed and definitive assessment on every possible aspect of road safety was not possible. There were several very detailed and high-quality submissions on numerous specific issues. Omission of these topics does not indicate they are unimportant.

The key issue from submissions, forums, meetings and discussions was the need for dramatic change in road safety management given the inadequately acknowledged national road injury epidemic and the costs to the economy
now and into the future. The panellists decided to emphasise and focus on high order governance and management issues. Many of the reforms recommended to the inquiry that have not been mentioned in this report could be
reviewed and addressed within the new proposed structures. In addressing the terms of reference, the panel took into account information provided as well as their many decades of experience. The emphasis was on creating a step change in road safety performance at the national level.

The inquiry focused on the current system’s safety, while recognising that modal shifts in transport, urban planning, technology, data, users, usage and cultural factors can and will be important. However it was felt that the existing road transport system will predominate for at least another decade or more given the current capital investment in infrastructure and modes.

The inquiry delivered 12 recommendations that, if implemented, will help transform road safety performance across the nation. 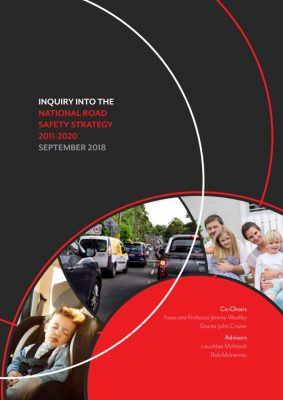