How to Increase Bicycling for Daily Travel

Bicycling is healthy: it increases physical activity, improves cardiovascular health, and reduces obesity and disease. Bicycling also can be an excellent mode of transportation for people of all ages. In fact, bicycling to school has been shown to improve cardiovascular fitness and overall health among children and adolescents. As with virtually any kind of sport or physical activity, bicycling poses some risk of injury, but recent studies show that the health benefits of bicycling far exceed the health risks. Moreover, as bicycling levels increase, injury rates fall, making bicycling safer and providing even larger net health benefits.

A national program of the Robert Wood Johnson Foundation, with direction and technical assistance provided by the University of California, San Diego. activelivingresearch.org
agencies and public health organizations have advocated for increasing bicycling as a way to improve people’s health and reduce air pollution, carbon emissions, congestion, noise, traffic dangers, and other harmful effects of car use. But what are the most effective strategies cities can use to increase bicycling?

A growing number of studies have assessed the effectiveness of many strategies for increasing levels of bicycling, including on-street bike lanes, off-street bike paths, and other bicycling infrastructure; promotional and educational programs, such as bike-to-work days and bicycle training classes; and policies, including parking restrictions and traffic-calmed neighborhoods. This brief summarizes the available evidence about strategies for increasing bicycling levels and encouraging bicycling as a mode of transportation. It also presents related policy implications.

At the city level, bicycling infrastructure is strongly associated with overall levels of bicycling, especially with bicycling to work, school, or shopping. One study of 35 large U.S. cities found that each additional mile of bike lane per square mile was associated with about a 1 percent increase in the share of workers commuting by bicycle. A more recent study using data from 90 large U.S. cities found that cities with 10 percent more bike lanes or paths had about 2 percent to 3 percent more daily bicycle commuters.

It is less clear what type of infrastructure is most effective at increasing bicycling for daily travel. Simply living close to bike lanes or paths does not necessarily increase levels of bicycling. However, a Seattle study found that adults living within a half-mile of a bike path were 20 percent more likely to bicycle at least once a week.

A national program of the Robert Wood Johnson Foundation, with direction and technical assistance provided by the University of California, San Diego. Creating bicycle boulevards by adding traffic calming features, such as speed humps, curb extensions, and pedestrian crossways, on streets with a low volume of traffic and installing cycle tracks, which are on-street bike lanes that are physically separated from motor vehicle lanes, encourages bicycling on streets where they are installed. Studies in Copenhagen, London, Washington, D.C., and Montreal found that bicycling increased after cycle tracks were installed and that cycle tracks attract more bicyclists than similar streets without cycle tracks. Although the studies did not examine whether bicycling increased overall or simply shifted from other streets to those with cycle tracks, the results confirm the popularity of cycle tracks.

A Portland study found that cyclists went the furthest out of their way to use off-street bike paths, followed by bicycle boulevards, suggesting a general preference for facilities protected from motor vehicle traffic. Striped bike lanes (i.e., those without physical separation) helped offset the unsafe, uncomfortable feeling of bicycling on busy arterial roads, but were not preferred over residential streets that had a low volume of traffic and no lanes.

New forms of pavement markings, including bike boxes, shared lane markings  or sharrows, and colored bike lanes, increase perceptions of safety, help guide bicyclists and motorists, and provide official, visible recognition that bicyclists are legitimate users of the  road. The impact of such markings on levels of bicycling has not been determined.

Other features of bicycle infrastructure also make a difference. Bicycling declines with the number of stops (e.g., due to stop signs or signals) along a route, poor pavement quality and inadequate bike parking. Several studies have found that women prefer facilities that have less motor vehicle traffic or  are separated from traffic. One study also found that women felt less comfortable than men on off-street paths, perhaps because of personal security concerns, such as fear of assault in isolated areas.

Read more in the attached article. 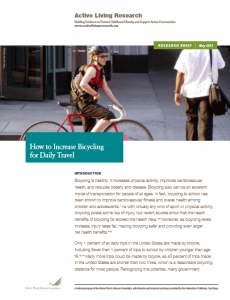