This Causes of Rollover Crashes information bulletin is part of the Heavy Vehicle Rollover Prevention Program. The information bulletin is an overview of some key points in preventing rollovers. It can be used as a flyer to introduce people to the concepts of the program, or as a handout during the delivery of the program. It may be reproduced as required but only in its entirety.

Each year in Australia hundreds of trucks rollover causing significant loss of life and injuries, damage to vehicles, property and goods. Truck rollovers occur with all types of trucks but are more common with trucks carrying timber, livestock, and bulk liquids. More recently there has been an increasing number of emergency services vehicles involved in rollover crashes.

There is no single solution to prevent rollover crashes. However, by understanding the causes, and creating a code of behaviour, the freight industry can help significantly reduce the number of rollover crashes.

A major study of 239 truck rollover crashes in the USA revealed that the following factors contributed to the crashes: almost half resulted from inappropriate speed when changing direction, that is, on corners, curves, and, on and off ramps the type of load being carried the condition of the brakes driver distraction, i.e. inattention, dozing or falling asleep. Rollover crashes can involve many factors such as vehicle speed, load, the type of vehicle and its condition, weather, location, and the driver.

The effect of speed on cornering stability, braking distance and impact forces are all made worse by increased speed. Cornering forces don’t just double when the vehicle speed doubles, they increase by four times.

Everything is affected by gravity and therefore has a centre of gravity: the point around which the object is balanced in all directions. Trailers with a high centre of gravity can rollover on an incline of as little as fifteen degrees, while the prime mover which, has a lower centre of gravity, will only rollover if the incline is more than sixty degrees.

A vehicle also requires the load to be centred. If the weight of the load is not centred across its width, stability will be reduced when cornering. If a load is not properly distributed along the length of the trailer, that is, if there is more weight on some wheels than others, then each wheel will not brake with the same force. This can cause wheel lockup.

The faster a vehicle travels, the longer it takes to stop. For example, if a truck’s speed is doubled, it will take four times longer to stop.

Centrifugal force  (overturning or side force)

Centrifugal force is the force that makes objects slide across the seat when a vehicle corners at high speed. It happens when a moving object, such as a vehicle, changes direction.

Changing direction causes a force pushing the vehicle away from the centre of the turn which can lead to a rollover. The tighter the turn, the greater the force will be to push the truck over. The same applies for the speed of travel to negotiate the turn.

Together, both speed and tightness of the turn will increase the risk of rollover. If a truck travels around a corner at 30km/h certain forces will apply. If the truck travels the same corner at 60km/h these forces increase by four times 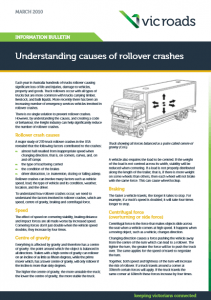