The following description was taken from Determinants Impacting Health and Performance of Truck Drivers – Telephone Survey by MUARC :

The Driving Health report number 8 describes detailed information gathered from telephone surveys with Australian truck drivers. The survey covered determinants from personal,
occupational, workplace environment, regulatory, lifestyle and health domains, and looked at how those domains influence truck drivers’ physical health, mental health and driving performance. In total, 332 truck drivers completed the telephone survey between September 2019 and June 2020. The study found that over one fifth of drivers performed work tasks that place them at high risk for injury, such as repetitive movements, manually lifting and working in awkward postures. Drivers also described frequent exposure to poor work environments such as unpredictable driving by other motorists and poor road or weather conditions. Nearly half of the drivers had experienced at least one incident of workplace violence in the past 12 months, with verbal abuse the most common.

Over two thirds (70%) of drivers did not meet the guidelines for a healthy and balanced diet, whereas almost half of the drivers (48.8%) did meet physical activity guidelines. Most drivers were non-smokers (77.7%), but over two fifths (40.7%) were defined as being at high risk of alcohol misuse. Experiencing fatigue whilst working was commonly reported by drivers (62.1%). One in ten (11%) admitted nodding off or falling asleep while driving in the last year. In total, 17.5% were defined as being at high risk of poor sleep with about one third (32.7%) of drivers using some form of medication (either over the counter or prescription) to manage either sleep or fatigue.

Our study showed that determinants from the personal, occupational, workplace environment, regulatory, lifestyle and health domains were all important predictors of a drivers’ work ability and psychological distress. Determinants from the personal domain had the biggest impact on the likelihood that a driver would suffer from psychological distress, which implies that family factors, financial distress and being in poor physical health affects drivers’ mental health. Personal determinants also played the biggest role in explaining drivers’ general health. Determinants from the health risk domain had the second biggest impact on drivers’ general health, including drug use, sleep, loneliness, Body Mass Index (BMI) and pain. Determinants associated with driving performance included family factors, working hours, payment type, time and scheduling, representing the personal and occupational domains.

Our study revealed the complexity of determinants of driver physical and mental health and driving performance. Interventions should focus on the determinants identified and should address multiple components. Several external determinants were found to contribute to driver health and driving performance that are beyond the driver’s control, such as working hours, the type of payment structure and work schedules. This suggests there is a need for interventions to be targeted at stakeholders in the transport industry other than drivers. In order to support drivers to be healthy and stay healthy at work, changes need to be addressed at an organisational and regulatory/government level. 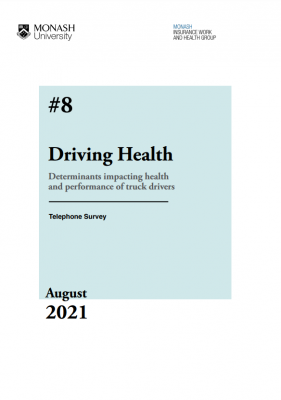