Over the past 40 years, countries like France, Germany, Italy, the United Kingdom and Japan have been able to decrease the road traffic fatality rate tenfold.

These figures, which cannot be contested, prove the point that, starting in the 1970s, combined efforts of local public authorities, manufacturers, accidentology laboratories, as well as associations of driving victims were able to increase awareness of risks when driving.

A mobilisation that has thus borne its fruits, even though only one person killed on the road, is still one too many. But these “positive” results often grind to a halt when leaving developed countries.

Currently 1.2 million people still die each year on roads accidents throughout the world, including 80% in countries with an intermediary income.

With the boom in auto acquisition (84.1 million new vehicles sold in 2012 vs. 56.3 million in 2001(4)), this figure could increase by 50% in the next ten years, if nothing were to be done. The increase in the number of middle class families goes hand in hand with a strong desire for mobility. The automobile is considered to be a sign of liberty and success. But with this boom, road fatality risks increase. Automobile manufacturers thus have a role to play in the fight for road safety, and Renault, alone or in partnerships, has
supported this for many years.

This has led us to adopt a holistic approach, taking into account the many factors in the system: users, vehicles and infrastructure/environment in all the countries in which we are present and elsewhere.

This is the reason for our commitment to the United Nations for the 2010-2020 action decade for road safety: being capable of
inversing the trend as we were able to do in Western countries. So that by 2020, we will be below the bar of one million people killed while driving, in spite of there being many more automobiles. Much hard work must still be done. 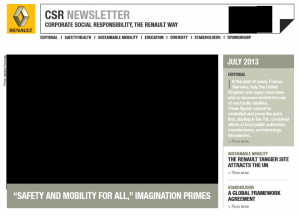