Driver sleepiness contributes to a great number of motor vehicle accidents every year. In order to reduce the number of sleepiness related accidents, more knowledge on e.g. prevalence, countermeasures and driver behaviour is needed. Data from field operational tests (FOT) has a potential to provide such knowledge with high ecological validity.

The objective of the project was to propose and evaluate methods for identification of driver sleepiness in FOT data. More specifically, the aim was to identify objective indicators of sleepiness – based on driving behaviour, eye blink behaviour and models
of circadian rhythm – and to evaluate a subjective video scoring method for estimating driver sleepiness levels. Data from two separate projects were used: 1) the ViP-project SleepEYE, in which a controlled field test was conducted, and 2) euroFOT, which was a large scale FOT.

An in-depth study on indicators of driver sleepiness was carried out using data collected in the SleepEYE experiment, with the purpose of employing the best indicators to study driver sleepiness in the euroFOT database. The most promising indicators were found to be mean blink duration and number of line crossings. A sleepiness classifier was suggested based on the distribution of the data (i.e. visual inspection). When applied to SleepEYE data the classifier was found to have good specificity while the sensitivity of the classifier was not so good. From euroFOT no true data on the drivers’ sleepiness levels were available and it was therefore not possible to evaluate the performance of the classifier. However, an explorative analysis showed that only very few data points were classified as sleepy. This may be reasonable since most trips were conducted during daytime, but it is a somewhat disappointing result for the project.

A study was carried out on whether it is possible to use video recordings of drivers in order to estimate the drivers’ self-rated level of sleepiness. Forty participants rated 54 one-minute video clips of an equal number of sleepy and alert drivers on a scale with three levels (alert, first signs of sleepiness, very sleepy). The results of the study showed that performing such observer rated sleepiness (ORS) estimations on drivers is extremely difficult. The videos available in FOTs are usually of rather poor quality which, clearly limits the possibility of making reliable observer rated sleepiness estimations.

In conclusion, studying driver sleepiness in (existing) FOT data is difficult, for several reasons: 1) eye camera based indicators suffer from detection errors and low detection rate, 2) driving-based indicators are influenced by e.g. road curvature and traffic
density, 3) models of sleepiness cannot be used since no information on hours slept and time awake is available, and 4) video scoring is not reliable, at least not given the quality of the available video recordings.

In future studies on driver sleepiness in FOTs sleepiness should be addressed in the FOT design. Some information about the drivers’ sleep and sleepiness (ratings, sleep diaries, etc.) must be collected during the test; otherwise it will be very difficult to get
any useful results. 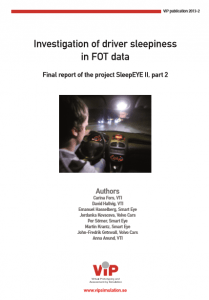