The rate of smartphone ownership in the UK continues to grow. Ofcom (2015) estimated that 66% of the population owned a smartphone in 2015 (up from 39% in 2012). Given the increase in ownership rates of these devices, the frequency of occasions where drivers may be inclined to use them during the driving task, either as a driving aid (such as for navigation) or for tasks which are unrelated to the driving task (such as messaging or social networking), is likely to also be on the increase.

A 2015 survey of drivers by the Institute of Advanced Motorists found that 77% of respondents thought that driver distraction was a bigger problem than was the case three years ago, with 93% believing that text messaging or emailing was a ‘very or somewhat serious threat’ to their personal safety (IAM, 2015). It is undeniable that drivers are increasingly connected to the outside world, both through inbuilt vehicle technology and also the portable devices that they bring with them to the driving seat. The ever-increasing array of technology means that there is an increased risk of driver distraction, which has clear consequences for safety Using data supplied by the Department for Transport, in 2015, distractions from inside the vehicle were a specific contributory factor in 2,920 accidents in Great Britain (a little under 3% of all injury accidents), including 61 fatal accidents (just over 4% of all fatal accidents). A 2015 study for the European Commission (TRL, TNO, Rapp Trans, 2015) estimated that distraction is a contributing factor in between 10% and 30% of road collisions in the EU.

A recent survey for the RAC Foundation revealed that “most people want to do the ‘right thing’ when it comes to road safety – they just need some help from product manufacturers” (Ben Marshall, quote from press release accompanying the report1). The survey found that 69% of the British public agreed that technologies which connect the driver to the outside world could distract people from driving safely, and that there was “a strong appetite for using a ‘vehicle safe mode’ on devices (such as a mobile phone) used in cars” (Rigby et al., 2015, p.3); 60% of drivers stated that they would be happy to use such a device.

In response to the proliferation of handheld devices and the apparent desire to ‘stay connected’, many functions or applications (apps) have been brought to market which either are specifically designed to improve smartphone functionality whilst driving, or may be used to do so even if this was not their primary purpose.

Connectivity solutions such as MirrorLink, Android Auto and Apple CarPlay allow drivers to connect their smartphone to their vehicle via a USB cable, and to access certain apps. These technologies are designed to enable the use of such devices whilst driving, whilst at the same time stating that they adhere to regulations related to driver distraction.

While many vehicle-integrated systems exist which connect the driver to the outside world, these have generally been designed to be used by a driver while the vehicle is in motion. In contrast, most handheld devices and their features have not been designed for in-vehicle use by drivers, and are thus not constrained by guidelines intended to govern their performance in the driving environment. Whilst connectivity between vehicles and nonintegrated devices is improving, there are still many challenges, “with the dramatic  mismatch between handheld consumer devices and automobiles, both in terms of product lifespan and the speed at which new features (or versions) are released” (Shelly, 2015, p.161).

Other apps exist which claim to simplify the phone interface for use while driving, while still others prevent texting or calling while the vehicle is in motion. Such apps are popular; for example, one app (SafeDrive), which rewards drivers for not using their phone at the wheel by accumulating points towards special offers, has been downloaded over 35,000 times from 140 countries; another app (Drivemode), which has a ‘no look’ interface relying on voice control, has been installed between 500,000 and 1,000,000 times. Such findings, and those from the recent RAC Foundation survey (2015), suggest that there is a level of desire amongst consumers to reduce their exposure to distraction from handheld devices while driving. It is less clear to what extent OEMs (original equipment manufacturers (OEMs), designers and data providers are keen to do the same.

A recent DfT consultation on penalties for the use of a handheld mobile phone while driving (analysis ongoing) sought opinions on proposals to change the fixed penalty notice, and on the desirability of ‘drive safe’ modes. To complement this consultation, the RAC Foundation asked TRL (the Transport Research Laboratory) to explore how ‘drive safe’ modes are being considered in the product design of both vehicles and devices. The overall aim of the research was:

“To establish to what extent OEMs, data/app providers and providers of network handheld devices are considering issues of distraction and ‘drive safe’ modes within their product design.”

In order to address this aim, nine objectives were established: 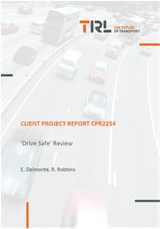