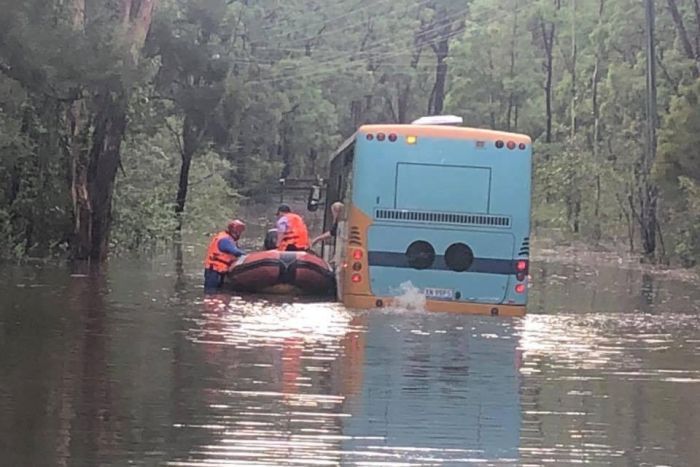 Police divers are searching for a driver missing in Sydney’s floods after his car was washed off a causeway at Galston Gorge, in the city’s north.  The State Emergency Service (SES) said 200 people had been rescued after driving into floodwaters during NSW’s three days of torrential rain.  Its also urged people in Sydney to stay home from work today as the clean-up continues in several areas.

Dozens of schools are closed and eight flood evacuation orders are in place around NSW.  “Everywhere has been hit, it’s hard to pinpoint where it’s worst,” Matt Kirby from the SES said.  Last night those around Narrabeen Lagoon on Sydney’s Northern Beaches, fled for higher ground as their waterfront properties came under threat.

As the system moves to the South Coast, people in Lake Conjola — where the bushfire clean-up continues — have been warned flooding is likely.  Mr Kirby said people should work from home today if they could, and that the organisation was expecting more calls for assistance.

A total of 54 schools have also been closed in areas including Narrabeen, Picton, Gosford, Wyong, Penrith and Paramatta.  “We are trying to ask people to reconsider their travel, a number of roads are closed,” Mr Kirby said.  “And we are still seeing people driving into floodwater.”

NSW Emergency Services Minister David Elliott said it was disappointing motorists were not heeding warnings after he called out “boofhead behaviour” yesterday.  “We have 400 SES volunteers trying to complete the backlog this morning and unfortunately this has included 150 flood rescues,” he said.  “The message to the motorists of Sydney and indeed the wider metropolitan area is if you can avoid being on the roads do so.”